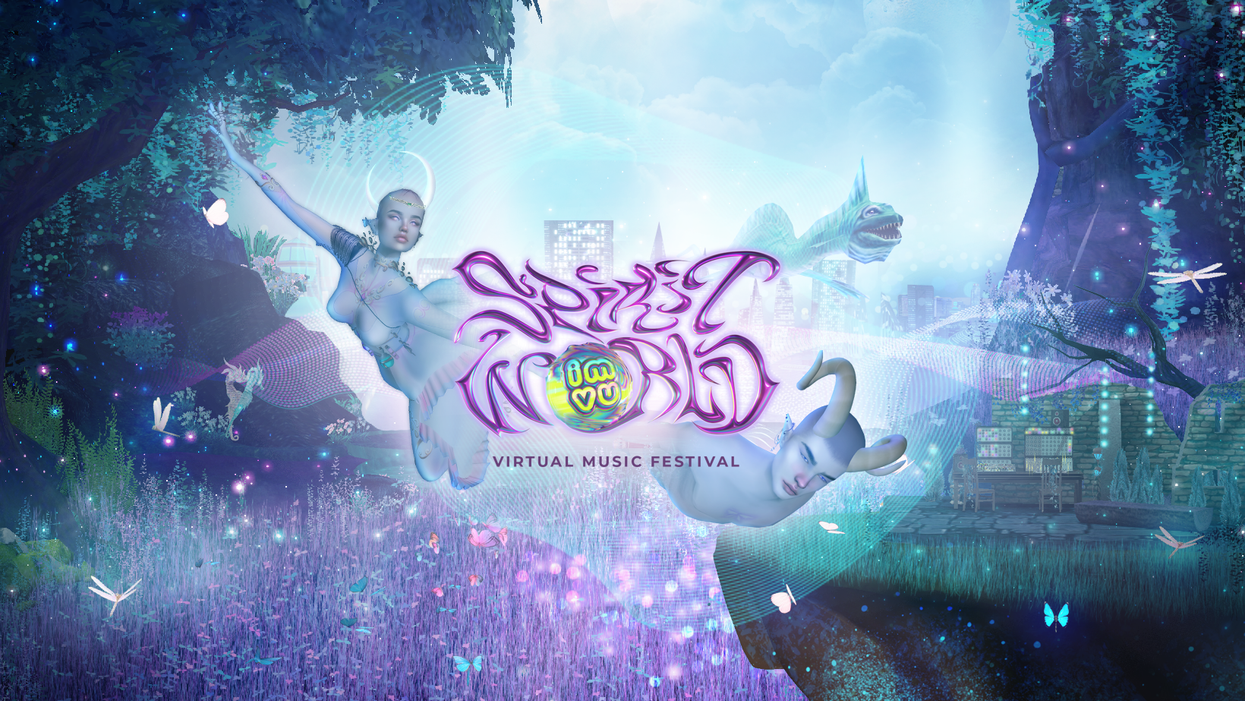 When? Spirit World takes place July 23 through July 25 and will be streaming on IMVU’s official Twitch.

Why Watch? Spread across three days with six different stages, Spirit World promises to deliver a mystical immersive experience paired with a healthy dose of 2000s-era cyber nostalgia. Now that we’re several months into this pandemic, it’s safe to admit that the initial novelty of virtual shows and festivals has quickly worn off. With larger promoters and mainstream artists looking to get in on the action and co-opt these spaces, it’s important to remember the underground collectives and scenes that originally pioneered the formats and made virtual shows a viable alternative. It’s nice to see IMVU officially sanction a lineup of exciting and diverse underground artists as a refreshing return to the bedrock of the platform. 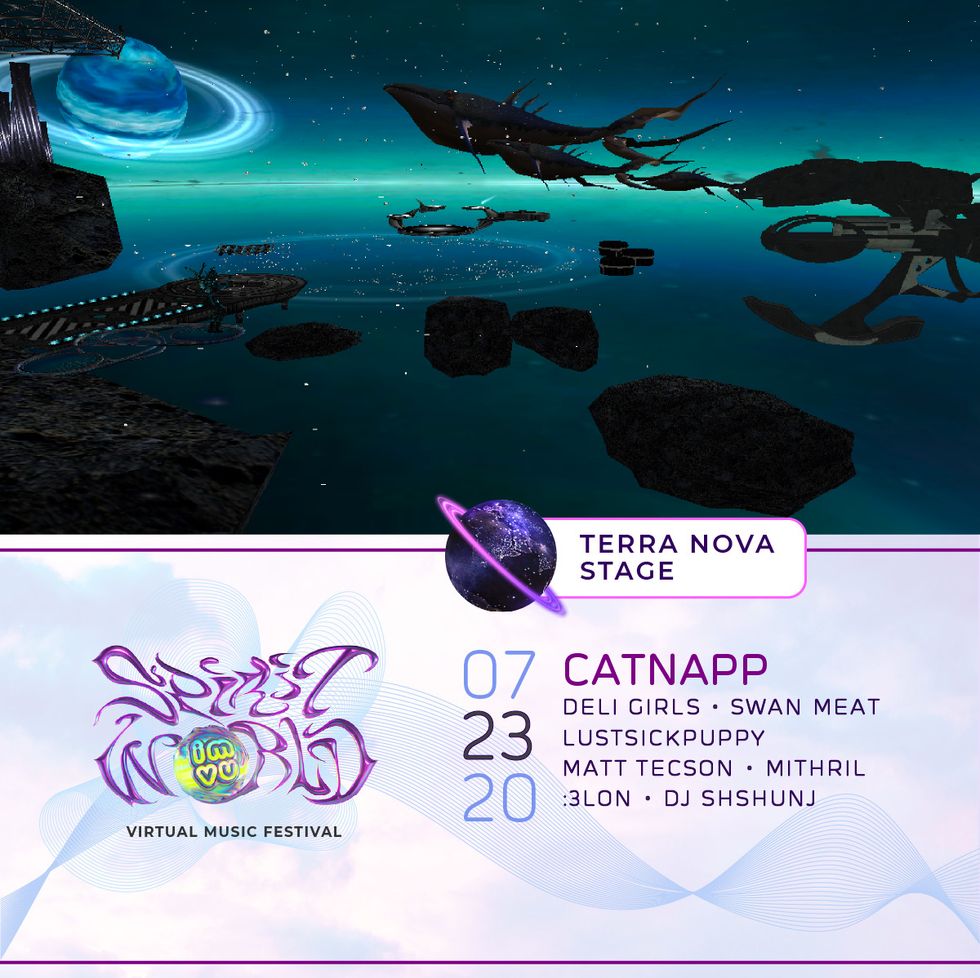 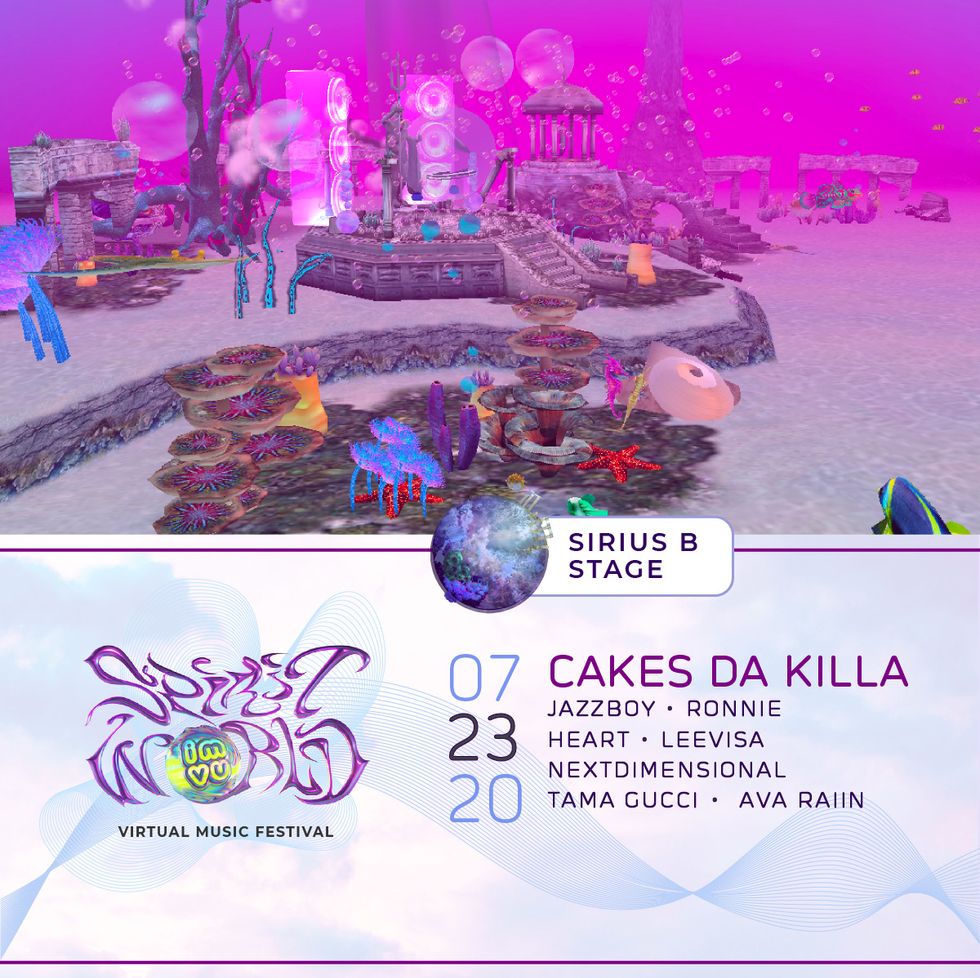 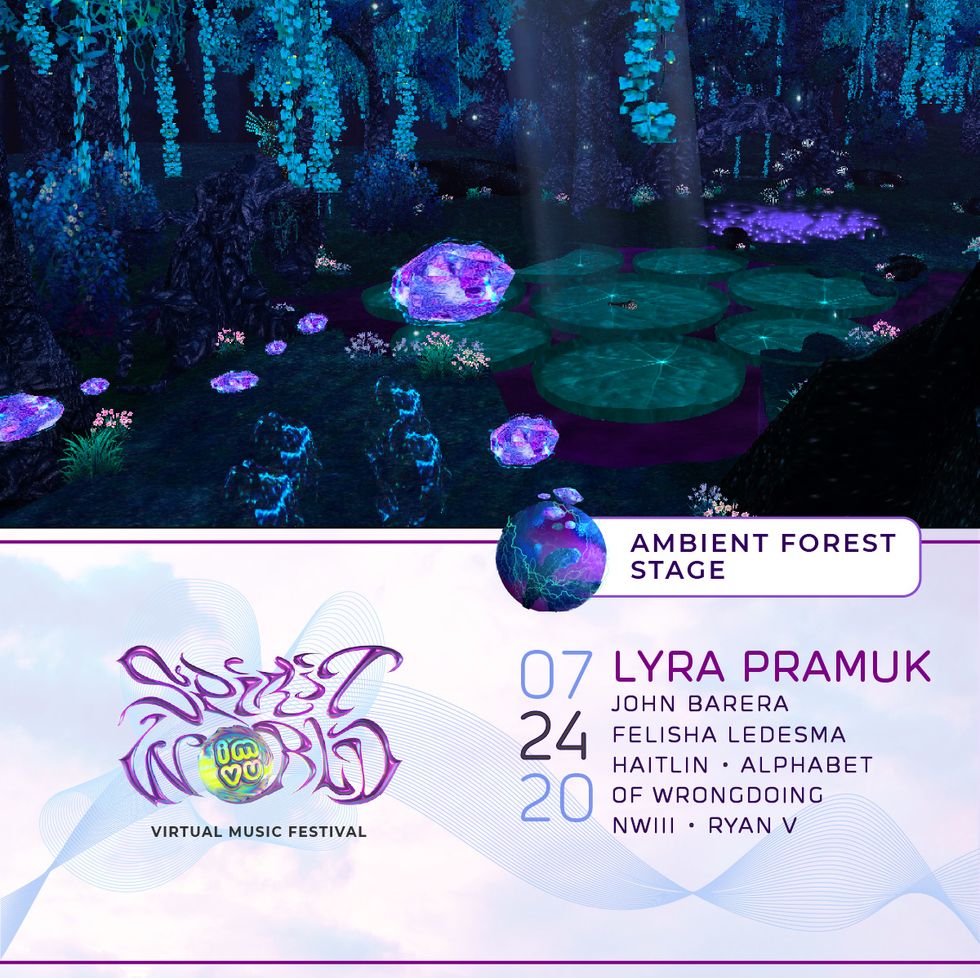 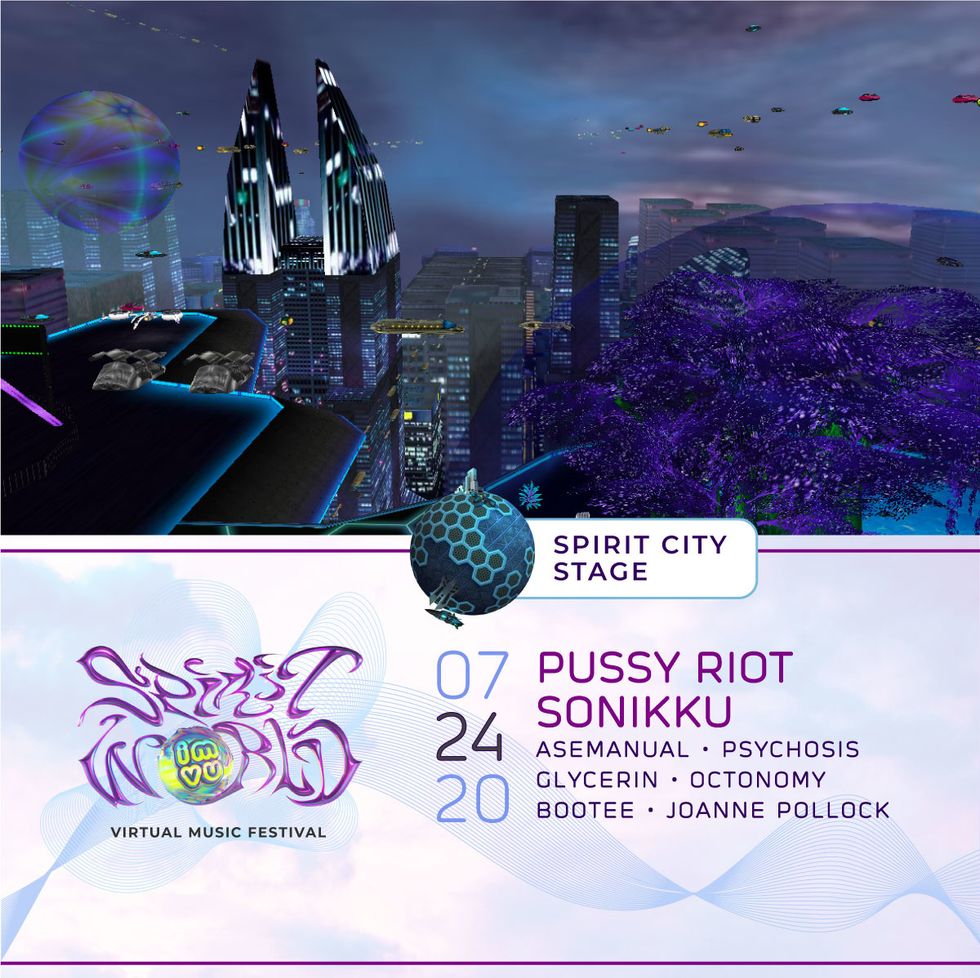 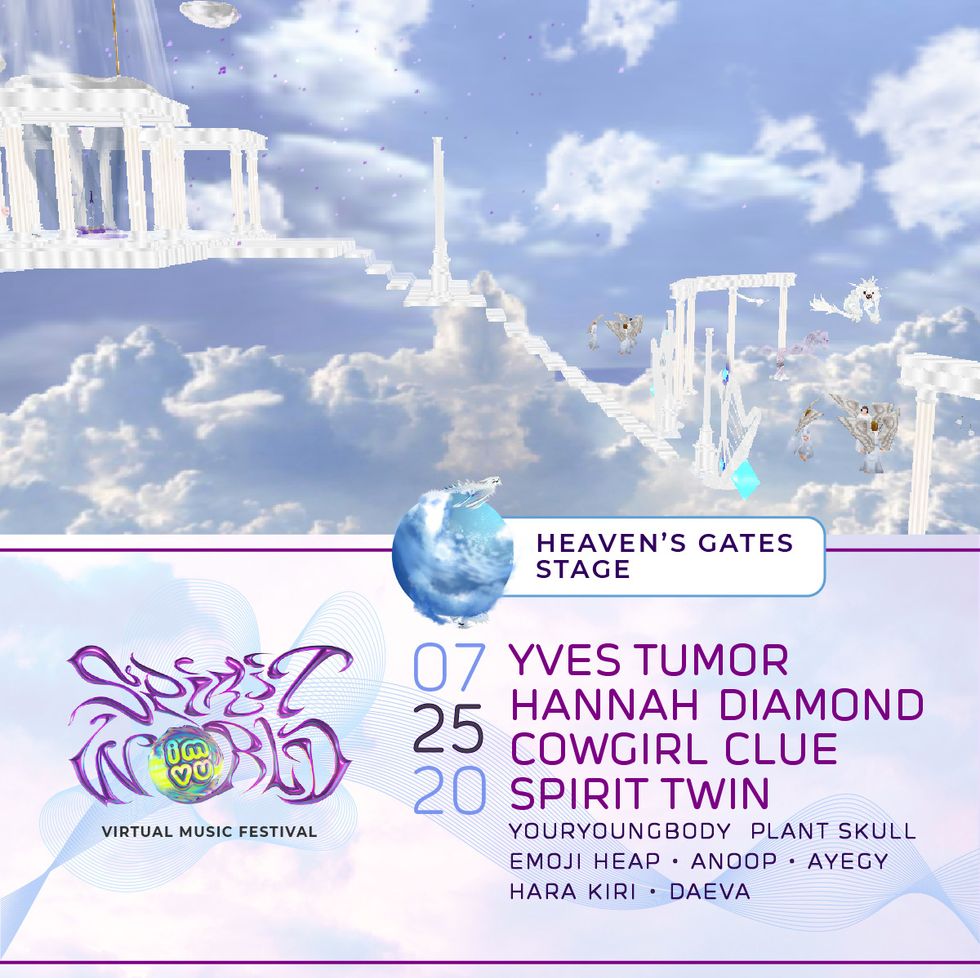 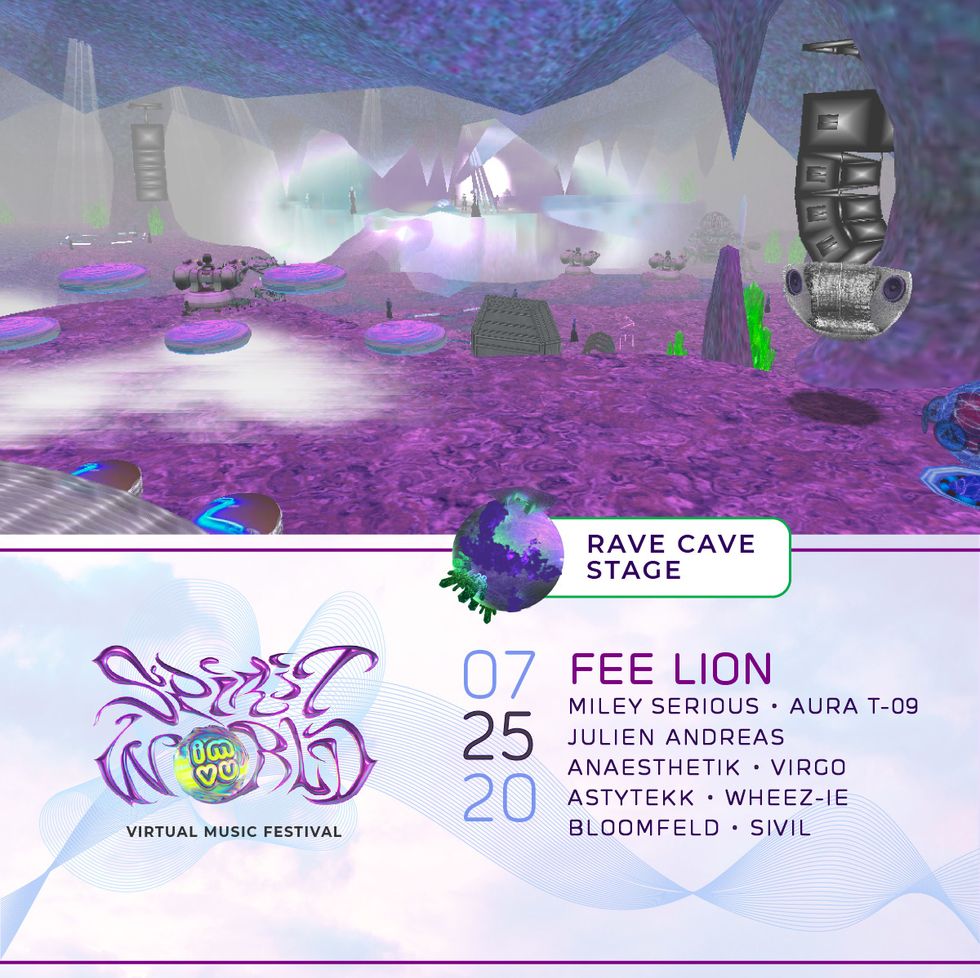 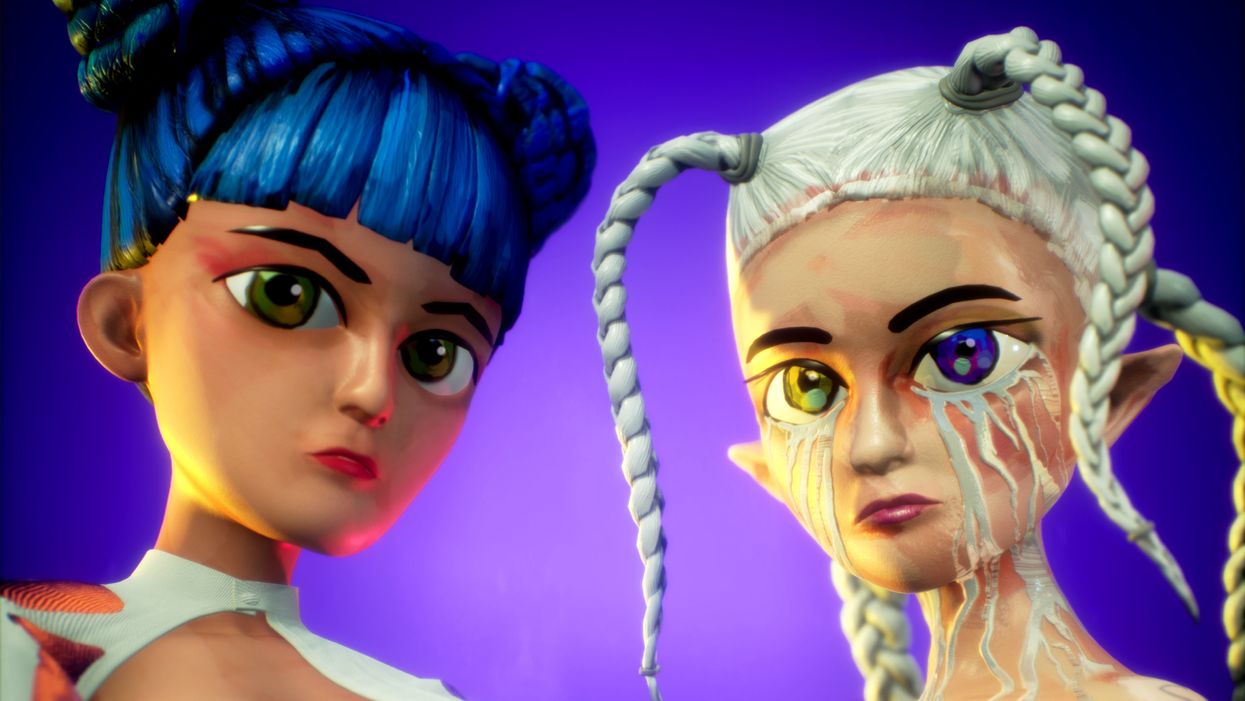 “Bitch, are you trying to make me cry?” Ashnikko shrieks over top of distorted guitar whines and booming trap drum loops on her newest track, “Cry (feat. Grimes).” While the song might be one of the shortest in her discography to date, it’s one of the most expansive, sonically — oscillating between threatening screams, punchy bars and Grimes‘ signature breathy whispers, the track is an ambitious burst of anger from the blue-haired pop disrupter.

Related | Ashnikko Is Ready for All of It

In the video for “Cry,” directed by Mike Anderson, Ashnikko is represented by a three-headed cyber goth character, a twisted and homicidal characterization of IMVU and The Sims. She stalks her prey in the music video, joined by a fairy Grimes navigating through a magical forest before attaching copies of herself to Ashnikko. It’s a wild trip through Ashnikko’s most glorious nightmares, bringing together multiple styles of animation for an experience that is literally out of this world.

Ashnikko’s been hard at work perfecting the Evanescence-inspired track for a while now, working around quarantine restrictions to make sure the song was packaged perfectly for its release. Read more below about how the singer has navigated TikTok fame, having more than one song go viral, and being labeled a “parody” artist.

When did you first start constructing “Cry?” How did you come up with it?

I wrote it kind of as a joke because I was like, “I wanna make an Evanescence song.” I listened to it back like a month later and I’m like, “You know what, actually this song is pretty cool.” I’m trying to think of a more serious answer to give to you other than that I was just playing around in the studio. I think this song is really about my old best friend, who like fucked my old boyfriend and I was really mad so I wrote that song about her because the bitch was tryin’ to make me cry!

Very, very simply she was trying to make you cry.

Yeah, she was trying to make me cry and I wanted to kill her. I wanted to fight her in the road.

I saw the video, it’s intense. It goes right along with that theme.

Very intense, I rip her in half.

I know, you ripped her in half with three heads..

There’s a lot of weird anatomy going on. The director was like, “So, we’re just gonna rip her in half.” I was like, “Are you sure, that’s pretty intense?” People were already mad at me for having some blood on my face in the “Stupid” video, I wonder how they are gonna react to like me literally ripping someone in half.

I think I am hoping that I can get away with it.

I noticed it’s one of those songs that can kind of play on loop and you just go along with it because it’s fairly short. Was that intentional, to keep it succinct?

I have the attention span of a tiny little goldfish. Not a medium-sized goldfish, a small one, a real small one with a small brain. I only think in 15-second bursts and then I forget what’s going on, so I make very short songs. But after the video was done, I was like “This is a really short song, maybe we should make it longer.” My management was like “WTF.”

When I watched the video, it didn’t feel very short at all. I think the video adds that element of a huge visual landscape.

I made a joke with someone the other day about making an entire album of like 15 second snippets for TikTok. Just because nobody has an attention span anymore, so like fuck it, you know?

Tierra Whack did Whack World with one-minute songs, so.

I’m wondering if that will be a new sort of ringtone-type of production, 15-second snippets for Tik Tok.

Yeah, there are no rules anymore. Just put all the best stuff in the 15 seconds and then end the song, and that’s it.

When did Grimes come into the picture for production and actually recording her verse?

So, I love Grimes. I worship her and I love her and she’s really one of my favorite artists. She followed me on Instagram and I shat my pants. Then I messaged her and I was like “Please, please, please be on my song,” and surprisingly she was very down.

It seems like she doesn’t do too many collabs, she’s very selective, which is so cool that this was built off of DMs. You’ve never met in person or anything?

No, I’ve never met her in person but she’s a very cool woman and she’s been very kind to me through this whole process and really collaborative. She’s been involved in the creative for the video and everything, she’s really cool.

With the song, was it always the intention to put out an animated video, or did that come from out of quarantine?

Well, I think because of the limitations of her being pregnant and also quarantine, we had to do it as an animated video, but I also just think animated video suits both of our music. We both have this kind of cartoon, graphic novel-style character that we’ve built up around our music, so I feel like it works.

Even if it wasn’t the intent, it just works so well that it seems like it probably would have happened regardless. It’s one of those songs that is so campy and over the top, super overdramatic.

Yeah, it’s screaming about crying and being like, homicidal.

When we talked last, we talked about “Working Bitch.” There was also that element of satire that you had in constructing that song. Do you see that as being a useful tool for songwriting for you, to kind of dip into those ironic spaces?

Well, I feel like my whole life is a joke and I can’t take anything seriously, just talk to my therapist when I laugh through my trauma. Just laughing, even the worst things in the world, I just have to laugh, so I feel like my approach to a lot of things is very joking and ironic. Somebody the other day was like, “Are you like a parody singer?” And I was like, “Fuck you, my whole life is a parody!”

I’m definitely not a parody act, but I just have to use humor as a coping mechanism.

I think a lot of people are doing that, too. It’s a bit strange when people try to box someone in as a joke or a parody, because even at the top of the charts, some of the most self-indulgent pop is supposed to be a take on itself.

Like, at the end of the day everyone farts. (Laughs) Like everyone takes a shit everyday and it’s all funny, stop being so serious. If you’re being too artistic and so serious, it’s just like arghhh.

Have you been recording at all now that you’re in quarantine? Do you have any plans to record, or are you pretty much just in the mode to prepare things to come out now?

So my label sent me a whole setup, like with the intention of me doing Zoom sessions and I laughed in their face and I haven’t done it once. I’ve just been finishing things. To be fair, I have been using it, but to finish small or minor details of my project — like changing a word to sound less bratty or something dumb like that. That’s what I’ve been doing this morning, just like wrapping everything up. That’s my least favorite part of making music, is packaging everything and making it pretty.

Are you one of those people who does the one take and then you go in and do all of the little tiny details?

Um, I’m a firm believer in “the vibe” of the day. Put “vibe” in heavy quotation marks and put like 5 I’s when this piece goes out as well, make sure that they know that I’m saying vibe sarcastically. [Laughs] I don’t know, the way you are feeling and the moment when you’re writing a song is probably the purest emotional place that you can perform from. It’s good to get the whole song on that day. I’m now learning that once you write a full song one day, you should write the clean version on that same day. I hate doing clean versions, it’s the fucking worst.

At least you don’t have to say “trick” or or something. I hate that, I used to be limited to the confines of what my parents were controlling in my iTunes library, so I’d buy clean versions of Nicki songs when I was younger.

Listening to them now, I’m like “Oh my god.”

I love that. So there is one line in “Cry” where I say “fuck a fuckin’ fuck boy,” and for the clean version, it’s “Just a little uhh boy messin’ up my plans.” There’s a lot of like “uhh” when I say fuck.

In a way it’s more explicit than actually saying the word, but as long as you can slip a clean label on it — there you go.

Exactly, I put out a song when I was 18 and it had “clit” in it, and it played on Radio 1 and I thought that was so funny.

Since we talked last, “Working Bitch” had a huge moment on TikTok and then the music video was so cool. Was that weird, to strike with that crowd twice with “Stupid” and “Working Bitch”? I mean obviously your fans were going to listen to everything.

I think it’s because the songs are so different, people didn’t know it was me, I think. So, it was just like me reinventing myself. It was good, it was a good moment. The thing that really bothered me is that the TikTok challenge basically had the wrong lyrics. It was such a small thing, it was a grammatical error that really bothered me. So, the lyrics are: “I’m a working bitch.” The TikTok challenge was: “I’m working, bitch.”

It changes the whole meaning. [Laughs]

I know, I was just so mad. One of the TikToks was like, “When your mom is asking you to do your laundry but you’re doing homework,” and you look at your mom and say, “I’m working, bitch!”