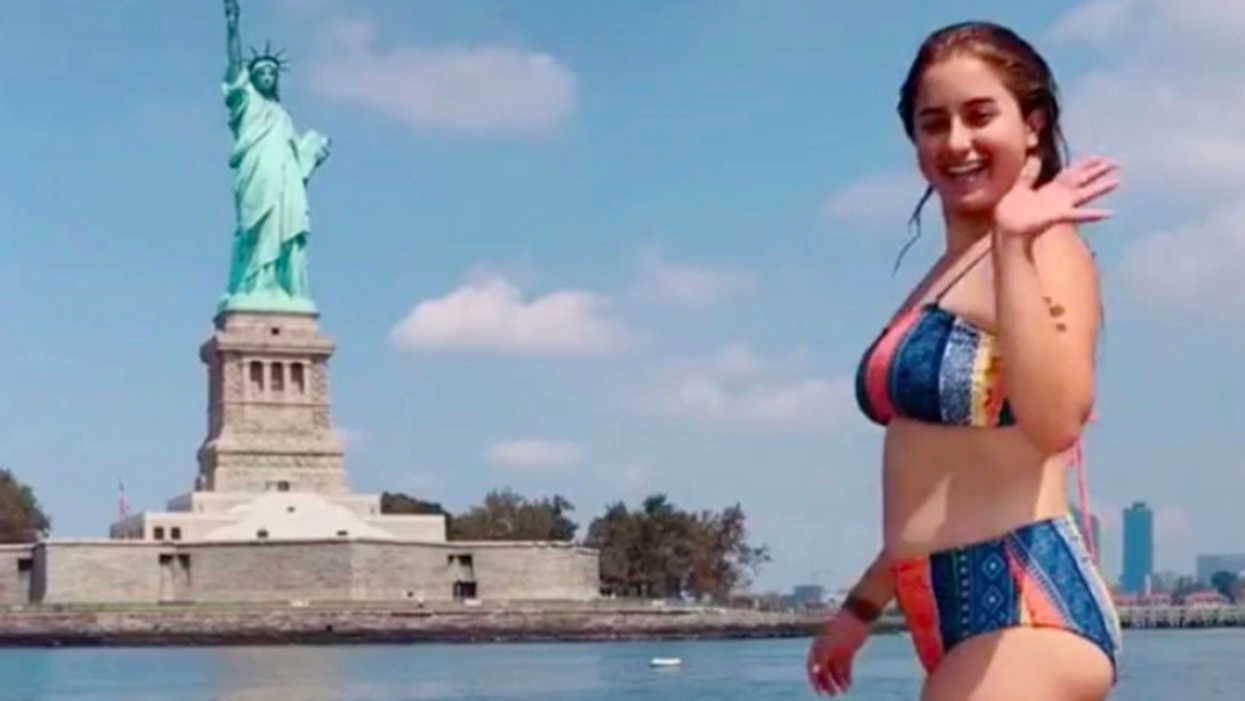 As far as waterways go, few are rumored to be nastier than the Hudson River. In between its metropolitan locale, history as a dumping ground for toxic chemicals and pollutants, and reports about the billions of gallons of raw sewage that end up in the harbor each year, it’s unsurprising that most people tend to be wary of taking a swim in it. Unless you’re Donna Paysepar, that is.

Recently, the 20-year-old Long Islander went viral after uploading two TikToks of herself jumping off a boat and “swimming with Lady Liberty.” And while she wrote that the dip felt “like a dream,” it didn’t take long for grossed-out internet users to wonder what the hell she was thinking.

“This is a death sentence,” as one Twitter user wrote, while others joked that she could face potential health problems from “chemical burns” to “tetanus.” Or worse, “mutations” from all the supposed toxic sludge.

In fact, the response grew so intense that Paysepar eventually followed up with a set of videos talking about the Hudson’s water quality. According to the pages she cited on the New York State Department of Environmental Conservation’s website, “the answers are mixed” when it comes to the water being clean and/or swimmable. However, “water quality has improved since the 1960s” and so, “swallowing a few mouthfuls of river water does not significantly expose a person to these pollutants.”

Reply to @icecaramellatte ##greenscreen I’m fine guys 😊💜 thank you for your concern, I will be attending my annual check up soon! ##learn ##hudsonriver

According to Paysepar herself, these sorts of concerns were the last thing on her mind. While what she swallowed tasted “like something was not right,” the water itself “looked clear” — much “like a regular lake or body of water that’s brown” — which is why she had no problems with jumping in.

“I’m always thinking of ideas to make cool TikToks and I’m pretty adventurous and like to have fun,” she recalled. “But I’d never seen anyone ever jump into the Hudson River in front of the Statue of Liberty. So I went ahead and saw an opportunity.”

And though she initially didn’t expect to go viral, Paysepar — who is an actress, singer, lifeguard and food blogger — explained that, as an entertainer, she saw the publicity as a good thing and has since decided to “make the most” of her newfound viral fame.

“Honestly, I have no regrets. It got me to have a couple more followers on TikTok and hopefully something great will come out of this,” she said, mentioning that she’s now running “a giveaway of $100 and two knock-off penny boards.”

Related | What Happens When You Unintentionally Become a Meme

“I don’t really see anything bad about [going viral],” Paysepar continued, before adding that she hopes people will now be able to see “the other side of her” — namely, that she’s “a giving person [who] wants to be there for my followers.”

The only thing that did “shock” her about the entire experience was the mean comments and death threats she received over the video — though Paysepar said that she’s keeping her own head high.

“I’m an advocate for anti-bullying and I believe that the internet is a very easy way to get behind a screen and troll,” she said. “It’s a big problem we have today. I just ignore it, because I know hurt people hurt people. If they’re treating other people that way, I can only imagine the way they treat themselves. So I just feel bad for them.”

Aside from the online negativity, Paysepar is determined to keep making content and is “open to collaborations.” And while she said she probably wouldn’t ever be swimming in the Hudson again, she does want people to know that she’s making a doctor’s appointment ASAP.

And yes, she also took a shower after.

[Verse 1]
Took a trip to San Francisco
All  our friends said we would jive
Didn’t  work, so I left for Fresno
It was quite a scenic drive
Pulled over to watch the children in the park
Used  to only worry about them after dark

[Verse 2]
Took  a flight to New York City
I miss that Hudson River line
Took the train back to Lake Placid
That’s another space and time
Where we used to go to drive-ins and listen to the blues
So many things that I think twice about before I do, yeah

[Outro]
It’s just a dream I had in mind