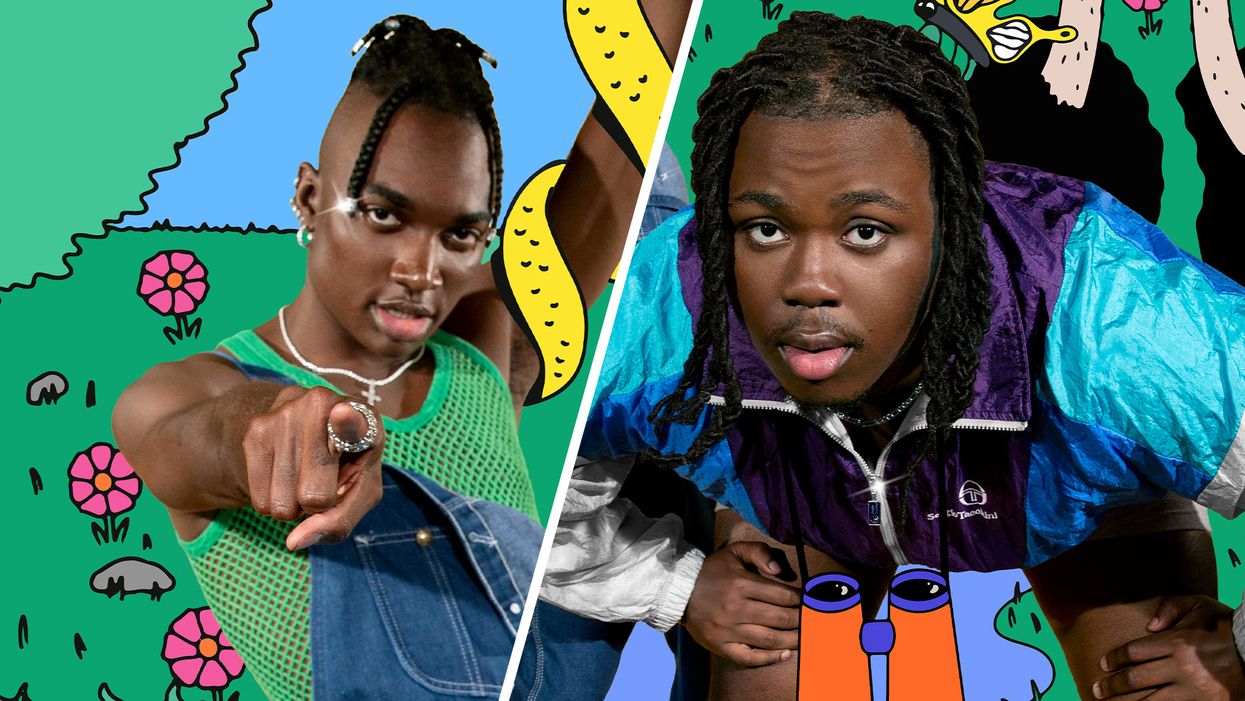 Best friends and internet superstars Rickey Thompson and Denzel Dion are among some of today’s most entertaining creators on social media. Evolving from Vine to Instagram to TikTok and then YouTube, Rickey and Denzel have developed strong stanbases around comedic videos of them dancing, performing skits and serving looks.

Now, these two have partnered with Snapchat to create a hilarious, new docuseries, Road Trippin’, where they embark on a road trip across rural USA to get out of their comfort zones and share some crazy adventures. Inspired by Paris Hilton and Nicole Richie’s reality show, The Simple Life, this show features five-minute episodes with wild activities, from skydiving to feeding alligators.

Road Trippin’ debuts this Saturday, July 18, on Snapchat with new episodes airing every other day. Being mobile-first content creators, it only makes sense that Rickey and Denzel work with Snapchat for their first collaborative project. Like all Snap Originals, Road Trippin’ episodes are vertical, full-screen, fast-paced and hyper-visual, featuring graphics, split screens and quick cuts.

PAPER sat down with Rickey Thompson and Denzel Dion to talk about their friendship, working with Snapchat, and what you can expect on the show. Open Snapchat on your phone and scan this Snapcode to watch the first episode of Road Trippin’. 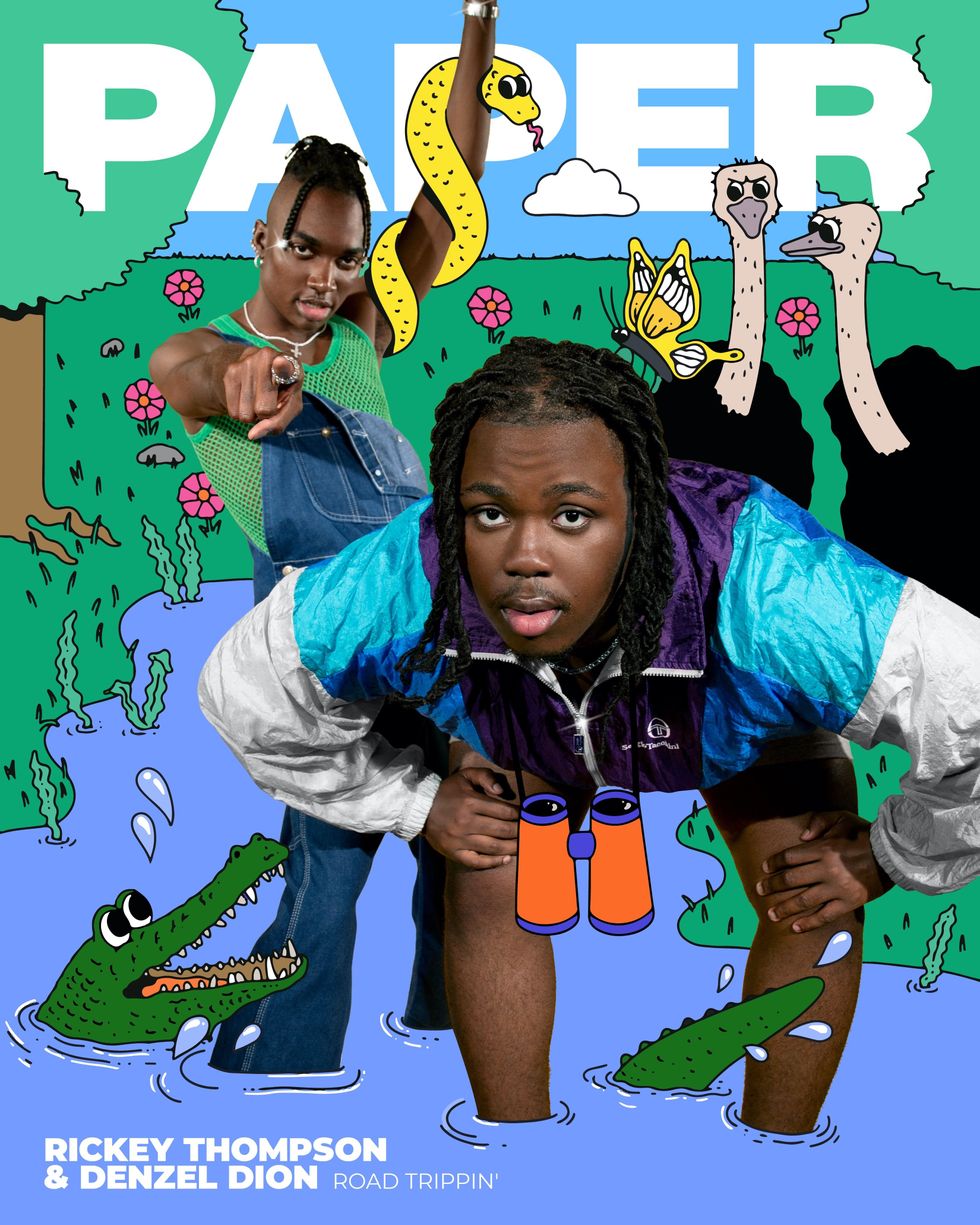 We’re living through such a negative time, right now. How are you both inspired to create?

Rickey Thompson: Since there is so much negativity in the world right now, I really want to be able to create positive content. I feel like a lot of people are looking for things to get their minds off what’s going on in the world today — something to make them smile, make them feel good, so I do get that drive to post positive content. I’m like, “If it’s a way out, let me do that for you.”

Denzel Dion: I do it because it makes me happy, and hopefully it will make other people happy. It was hard creating positive content when everything started going on — you didn’t post on social media, you were protesting every day, our ankles were swollen, our knees were hurting, it was hard. I didn’t understand how people would post regular things. When it was at its height — and things are still happening — it was weird to post regularly like nothing was going on, to be oblivious.

How did you two meet and become friends? Tell me about your relationship as besties.

Denzel: We met in 2014. There was this convention, Digifest, and if you were on Digifest, you were that bitch — if you got on it, you were up-and-coming. It was one of those lottery ticket things, and Rickey and I got on it as Viners at the time. And then Rickey DM’s me and was like, “Are you going?” I was like, “Yeah, bitch! I live in New York, are you going?” And then that’s it. That’s literally how it started.

Rickey: It was love at first sight, I always say. I just knew he was going to be my best friend forever. I got the energy and the vibe and I was like, “Oh my god, I love this guy so much,” and the rest is history. We’re still here and still have more years to go! I tell him he can’t get rid of me.

Denzel: I will be getting rid of you soon.

Have you been together during this quarantine at all?

Denzel: Yeah, we were. We live down the block from each other. Rickey is next to me, so it’s easier to see him now. Two years ago, like last year and the year before that, Rickey moved like 30 minutes away from me and we barely saw each other. We saw each other, but it wasn’t a lot.

“Since there is so much negativity in the world right now, I really want to be able to create positive content.” –Rickey Thompson

How has it been?

Denzel: It’s been fine, I really wasn’t doing anything. He would just go to my apartment or I’d go to his, but we never went anywhere as a group or collective unit. We haven’t shopped!

So let’s talk about your Snapchat show!

Rickey: Oh my goodness, we love this show so much. It’s literally us going across America doing things that we thought we would never do. There’s a lot of things that we’re doing in this show that I have been wanting to do on my bucket list. With Denzel, he’s the type of person that’s like, “No, I’m not about it,” but the fact that we were able to do this together, it makes me feel so good. It was a very fun process for us. We had so much fun being on the road doing adventurous things, getting out of our comfort zone.

Denzel: There were things I’d never do, like I’m from New York, I’m a city kid. I don’t care about sheep and farms and stuff like that, but we did it and it was so fun. Rickey is very adventurous. I’m adventurous but to an extent.

Rickey: And this is something we’ve been wanting for so long. We’ve always wanted an opportunity to film something together. It was really cool that we were able to get this opportunity because it’s a long road to get to.

What episode are you most excited about your fans seeing?

Rickey: That’s my favorite one.

Denzel: When we did it, I said this episode is IT. It is so funny.

Rickey: Out of all the shooting days, that was the funniest.

Denzel: It was obvious, the whole cast and crew was laughing the whole time.

What are some of the places you go to outside of the safari on your road trip?

Denzel: We fed gators; we went straight to a farm first, then we went to go ride horses and that’s where I fell off. What else did we do? We went fishing–

Rickey: Literally, the whole time I thought I was going to die. That was the most scared I’ve ever been. Free falling in the sky, honestly. Mmm mmm. You just see down and it’s the ground, yeah I couldn’t. Never again, but glad I did it!

Denzel: Yeah, Rickey had been talking about doing it and I’m like, “I just can’t.”

Rickey: Yeah, I understand now. I understand. That was something I’d been fine not doing. Oof, but I did it. Oof, never again! Mmm mmm.

Are you excited to be doing this through Snapchat?

Rickey: I’m excited because it is our first project and like what Denzel said, we need feedback together, so the fact that we have this show coming out and so many people are behind it is so exciting. This was such a long thing to work towards and we watched all the episodes, we loved the episodes, the show is so cute and so fun, they really show that it’s so much fun to have an experience with your best friend.

Denzel: I feel like it’s one of many we’ll make together. It’s like, “Damn, this is the type of hoodrat shit I want to do with my friends.” We’ve had meetings, we’ve pitched so many show ideas and it’s finally here. Also, everyone has Snapchat and we love our Snapchat team. Bunim/Murray, they produce Keeping Up with the Kardashians, they also did The Simple Life with Paris and Nicole; and also, Anthony Anderson from black-ish. I mean, hello Anthony Anderson is everything. It has the right names behind it and it felt good when we got that DM. I called Rickey and said, “Oh my god, Anthony Anderson just DM’d me and said our name came up in a meeting.” We were both like, “Okay, something is happening.”

“There’s nobody like us, being individually ourselves…” –Denzel Dion

I already know you two are going to be serving looks in this series, so tell me about how you have stepped into the fashion world.

Denzel: Okay, so what we’re wearing–

Denzel: We wanted fashion to play a main role, but the thing is we can’t wear any logos because of filming with Snapchat, we’d have to get things cleared. Our fashion is interesting, we gave you what we gave you–

Rickey: What we could… [Laughs]

What’s next in your internet domination?

Denzel: We want to do it all, okay.

Rickey: It all. This is our brand, this is our business now. This isn’t the last you’ll see of us. We’re going to do way, way more in fashion, of course. We definitely want to step into acting.

Denzel: We talk about acting all day, 24/7. We do want to take the film industry by storm. There’s nobody like us, being individually ourselves and then putting it together, it’s over, it’s shut down. We play off each other very well. I feel like people love to see two people come together actually enjoying each other’s company. It’s not a competition, it’s not envious, it’s not fake, it’s authentic, it’s cute and real. A lot of people can relate to that. There’s nothing like that. Who’s like us?

lyrics https://lyrics.az/?new_a=mixedsearch2&keyword=chris walker someone to love me forever a-z