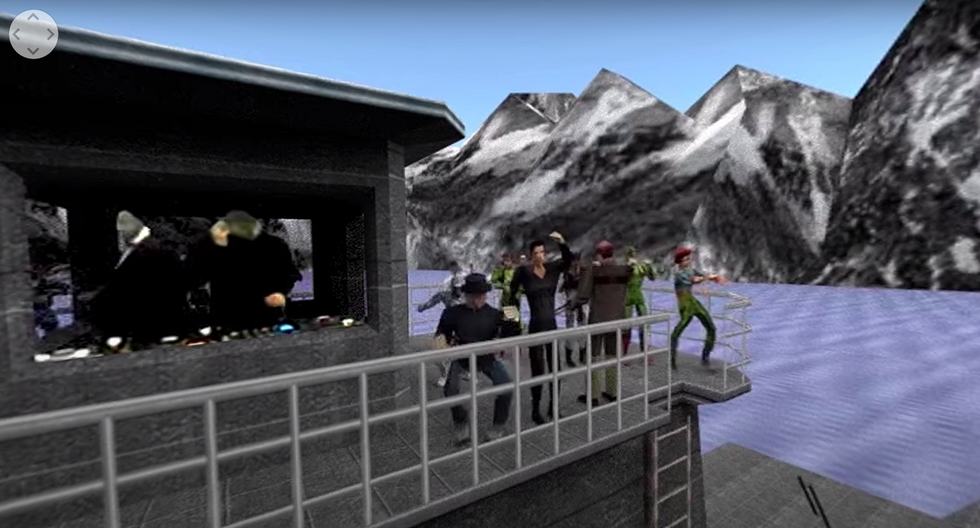 As virtual raves have become the norm for an entire nightlife industry displaced by the global pandemic, a new race to stand out amidst a flood of livestreams has emerged.

From Minecraft to Imvu and even Fortnite, artists have increasingly been turning to the world of video games as a way to give fans a more immersive, digital show-going experience. By using an avatar, attendees can navigate 3D environments and interact in virtual space like simpler times when everybody could cram into rooms with hundreds of strangers and get our ear drums blown out while vodka sodas spilled down our backs.

And while video game raves may be one of the more exciting alternatives to gain traction under quarantine, we still have to ask: can we take it yet another step further? Comrade Massie seems to think so.

Related | How to Watch Travis Scott’s ‘Astroworld’ Event in Fortnite

A creative lead at Boiler Room, Massie has been spending his time in quarantine recreating stages from childhood video games and turning them into virtual clubs where viewers can party alongside characters like Sonic and Zelda. The idea, which started out as a joke rivalry between Boiler Room and Cercle as a way to one up the other livestreaming platform’s picturesque locations, quickly grew into a passion project for Massie when global clubs began to shut down.

Odds are you’ve already seen one of his sets floating around your timeline, having already transformed the Nintendo 64 versions of the Legend of Zelda’s Hyrule Castle and Sonic’s Green Hill Zone into dancefloors. His latest recreation sees Massie reviving the iconic Dam level from one of the console’s cult classic first-person shooters, Goldeneye 64. Tapping undercover aliases of DJs Die Another Kisray (Minou), Haynes Bond (Maximum Haze), Goldpinger (Club Winston) and her Rajestys Secret Service (Raji Rags), all four team up for a back-to-back secret set of electro, techno and trance from the likes of Boys Noize, Objekt, Martyn and Skee Mask.

Ahead of the PAPER premiere of his Goldeneye64 DJ set, we caught up with Comrade Massie to better understand what went into recreating the level and where he plans to take the project going forward.

Where did the idea for this come from?

The idea for it came from an observation about the friendly competition between Boiler Room and rival music platform Cercle. While we tended towards low-key basements and warehouses (hence the name), they’ve always been one for pageantry, featuring impressive locations and impressive swooping drone shots that will often slowly descend down to a tech house DJ’s bald head (I kid, don’t send the drones after me). The Eiffel Tower, the Great Wall, Iguazú Falls… that kind of thing. Some friends and I joked that eventually Zoomers would be unimpressed by the kind of locations that serve as default green screen backgrounds and would only relate to iconic game levels. Then after a brief pause, the realization set in: that sounds fun. I’ve always been into video games and music primarily. I don’t really watch films or TV series, so this is a nice crossover which I’m sure other losers like me will enjoy.

There’s the practical consideration of being able to retrieve the assets: popular games will often have strong modding communities, so the tools exist to extract the data from the game that’s needed. More obscure titles require lots more work. There’s also issues like the fact that PS1 games are notoriously hard to get models from (often they will lack “z-axis” co-ordinates in the extracted data and thus come out as a 2D mess). The fun part is figuring out which ones work best as a stage for DJ sets, and how different levels would suit different musical styles and atmospheres (for instance, the Sonic Green Hill Zone d&b set or Crash Bandicoot 1’s N. Sanity Beach party I’ve just finished texturing). It’s also exciting to imagine how each of the game’s characters would react to the music, as well as adding little easter eggs into the background for people to spot. 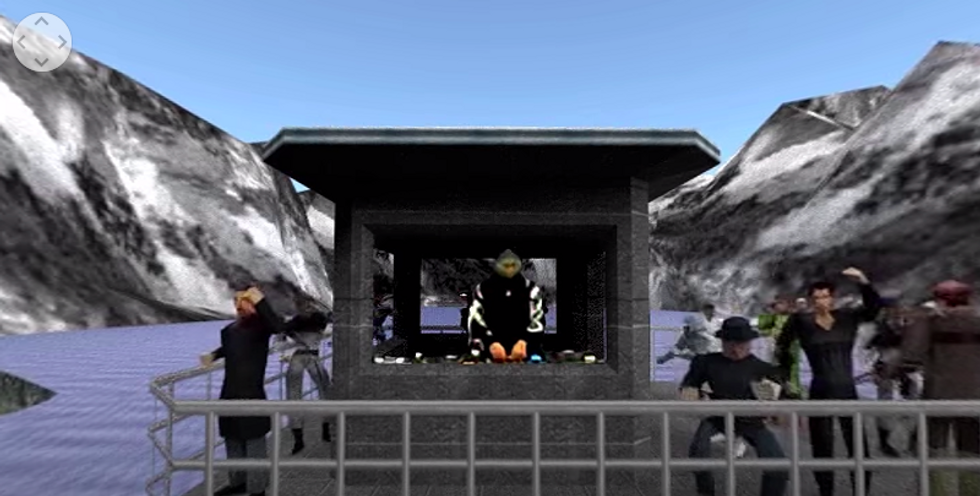 What do you hope viewers get out of these sets?

Other than the brief burst of nostalgia, I hope that it sets the scene in their minds for the kind of tracks that are gonna be played. Beyond that I’d just expect them to treat it like any other DJ livestream. A quick glance at it every so often before relegating it to one of their many browser tabs while they work. To be fair, I’ve never really been into super overproduced live shows or streams. I get why people like it, but I guess I’m a man of simple tastes. Some basic visuals and good music will do me fine. I also like it as an opportunity to showcase a lot of lesser known tracks that people would shy away from in a club full of people fiending for the big hits. You’re not obliged to pander to the crowd: I will make them dance whether they like it or not. That, and getting a shout out from a party happening somewhere is always gonna be a plus.

On a technical level, how do you go about creating these 360 environments?

Without going into too much detail, I’ve used a very budget 360 camera (been attempting it with a normal camera while in quarantine and stretching it into an artificial 360° shot). I also build the whole environment in Blender, a powerful free 3D software that often gets overlooked (everyone should have a copy). Depending on the game, sometimes I’m required to rebuild or retexture certain parts, which can take weeks or even months if I have a lot on. I also animate everything myself, which was a steep learning curve but a challenge that I relish each time. I figured that a lot of the average clubgoers you’d see on livestreams can’t dance at all (myself included), so folk could perhaps excuse my admittedly garbage animation skills. 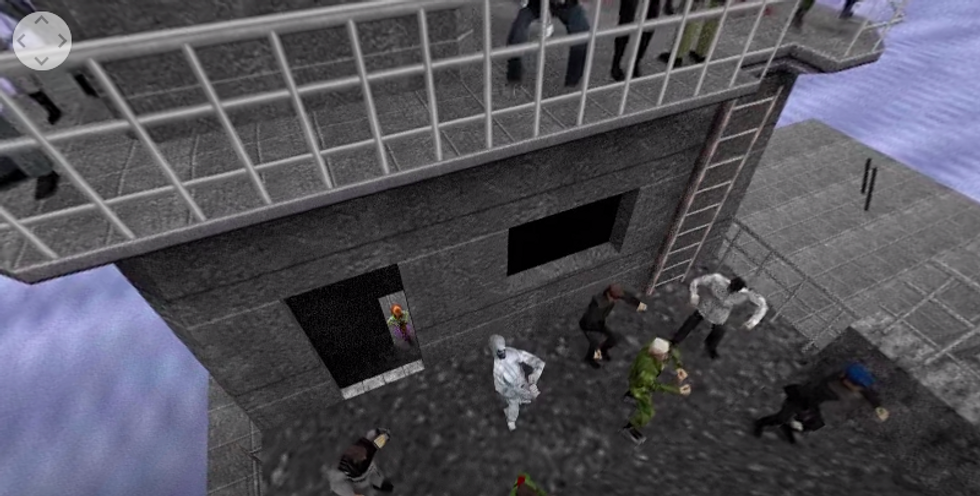 What do you see as being the future of this project?

Given that the conditions of this coronavirus lockdown might impact the ability for folk to gather together in large events for a while, it’s a (hopefully short) window of time in which these livestreaming concepts can flourish for a bit. This project was only started for a laugh last year, so the support from some of my idols has been a pleasant bonus. I don’t want to try and monetize it as I respect the hard work that has gone into the development of these games and can’t claim credit for that

In terms of what ones I want to do next, there’s label we’ve been starting up (named Truth-Hz), which features many of the artists involved in an official series I run on Boiler Room called Crowdsourced. The show has producers make music live from random snippets of audio (and endless memes) that the audience send in. I’m really proud of how it’s progressed thus far despite many setbacks, and I love the little family of insanely talented Soundcloud legends that it brought together. No cap, I see them all as the best producers in the UK right now.

Shout outs to Wize (the host), MoreNight, Parkinson White, Emmavie, Digital Mozart, Ouri, ROMderful and Oshi. Each of them will have their own release party in different games: Super Mario 64, SSX Tricky, GTA, Jet Set Radio Future, Metal Gear Solid, Spyro and more. I’m very much looking forward to all those, as I was hoping to do an official Boiler Room in the office as a label showcase this summer. That plan has been shelved indefinitely. This is a nice way to soothe the disappointment of both that and missing out on some of the worldwide BR shows I was booked to direct. Think it’s time to switch dimensions for a bit.