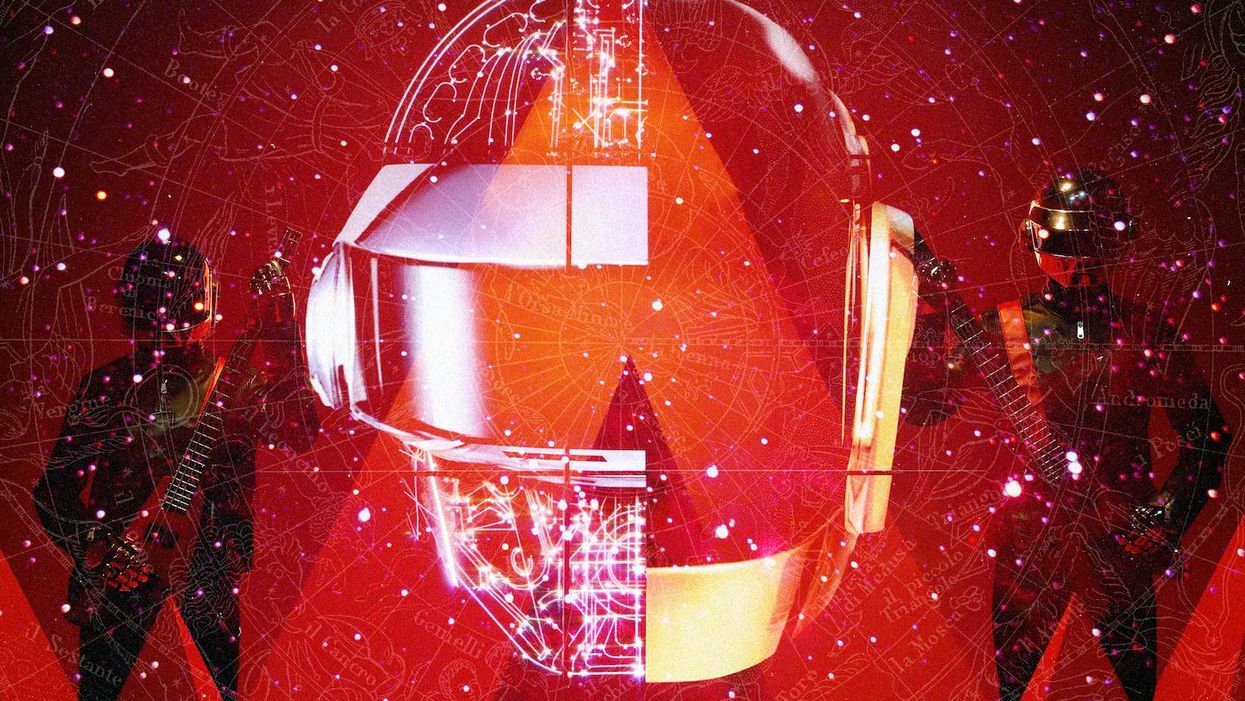 With new column In the Stars, popular TikTok astrologer Maryaam AKA @shawtyherbs looks for the astrological patterns in big pop culture events. From celebrity pregnancies and break ups to viral Billboard chart hits and blockbuster movies, every headline corresponds to the movements of the planets, and Maryaam explains how. Check out her corresponding TikTok videos over on PAPER’s account.

Daft Punk, the elusive French electronic duo known for their retro-futuristic helmets, first made their way onto the scene in 1993 and released their debut single “The New Wave” the next year. They’ve had a huge impact on music and popular culture, and their recently-announced break up has broken the hearts of club kids around the world.

But surprised as we all were by the news, there is astrological reasoning behind why the duo — made up of Guy-Manuel de Homem Christo and Thomas Bangalter — split up after all this time. Let’s look to the stars to see why they might’ve made this decision.

For starters, after 27 years as a group, Daft Punk is currently experiencing a “Saturn return.” Saturn is the planet of setbacks, delays, challenges and tension. A Saturn return occurs when the planet returns to the place it was in your birth chart, typically in your late 20s. It is a time of tremendous change, and can sometimes bring on challenges that force you to make important and life-altering decisions. Saturn returns can represent major endings of chapters in our lives, but they also help us to embark on a journey of tremendous self-improvement.

Then there’s the astrological journeys of the musicians themselves. Born on February 8, 1974 Homem-Christo had Mercury transiting his 10th house, and in a sextile aspect to his natal Neptune (the placement of Neptune on his birth chart) on the day of Daft Punk’s breakup announcement. “Aspects” in astrology refer to the angles and energies two planets have with one another. Sextile aspects are positive and harmonious, and can help us to expand and develop for our greatest good. This aspect indicates that the decision to break up can help Guy to reach new heights in his life.

Mercury is a planet that represents our communication, our thoughts, our ideas and contracts. The tenth house represents our public career image, public career identity, our career, career success and our legacy in this lifetime. Neptune is a planet that can represent disappearances, or the end of something. As Neptune is currently transiting his 11th house, which can represent collaborative efforts and groups, this aspect might indicate that he was the one to suggest Daft Punk disband, in order to pursue a solo career.

Related | Daft Punk and the Rise of the New Parisian Nightlife

Born on January 3rd, 1975, Bangalter had Saturn transiting his 11th house and in a trine aspect with his natal Pluto in the seventh house on the day of Daft Punk’s announcement. Trine aspects are very positive and harmonious to have in a chart. They indicate that the energies between the two planets innately work well with one another, and they can often bring us something positive and fulfilling.

Saturn represents challenges, hardship and tension. The 11th house, as we know, is the house of groups, and collaborative efforts. Pluto is a planet that gets rid of and destroys things we no longer need, in order to bring us something better in the long run. So, with Pluto currently transiting his 11th house, Bangalter’s transit chart also indicates the dissolution of a group to encourage a new journey of self discovery.

The good news? Despite their split, both members of Daft Punk have bright futures ahead of them. Homem-Christo has Pluto in the fifth house in his birth chart, and it’s trining his ascendant. Pluto in the fifth house can help someone transform and reinvent themselves through creative and artistic pursuits. This is because Pluto also represents rebirth and transformation, and the fifth house in astrology represents creativity and artistic pursuits. Pluto is aspecting his ascendant, which represents self, how you perceive the world and how other people view you. Guy may embark on a journey of self-reinvention at some point in his life, so don’t be surprised if he comes out with new music as a solo act that transforms the way we view him!

Bangalter meanwhile has Jupiter in the 12th house in his birth chart. Jupiter is the planet of expansion, growth, optimism, faith and abundance. The 12th house can also represent our imagination and creativity. This placement can help him to invoke big ideas that can heighten the trajectory of his solo career. This placement can also give him an expansive imagination, and an abundance of creativity to help him along his life path journey.

Since their split, Daft Punk’s sales have skyrocketed, which can be attributed to Bangalter having Mars transiting his second house and being trine to his natal Venus in his 11th house on the day of the announcement of their split. Mars is the planet of quick action and eagerness. The second house rules our finances; particularly our savings. Venus is a planet that represents various things such as music, our happiness and love. The 11th house can represent financial gains and fans! This aspect might indicate receiving money quickly through boosted music sales in the wake of Daft Punk’s breakup announcement.

Homem-Christo had Venus transiting his tenth house and in a sextile aspect to his natal north node in the eighth house on the day of the announcement of their split. Venus represents music, and it can also represent money. The tenth house represents our public career image, our public career identity; career success, and our legacy in this lifetime. The north node represents our destiny, our purpose and what we may find ourselves intensely focusing on. The eighth house represents rebirth, transformation and sudden events. This aspect can indicate suddenly receiving money through music sales and embarking on a journey of self-transformation and renewal.

Daft Punk has created a perpetual legacy for themselves through their hard work, creativity and ear-pleasing music. We are so grateful for their work, and we wish them nothing but luck in this new chapter of their lives.