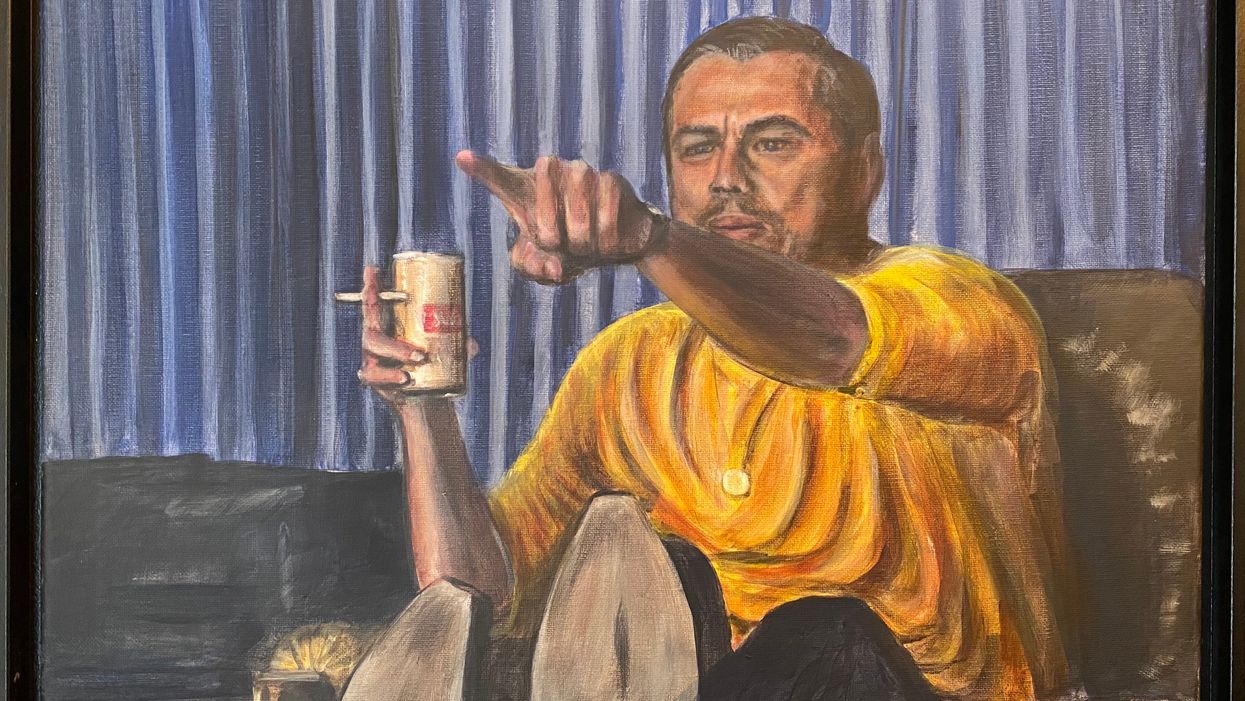 Even if you aren’t familiar with Travis Chapman‘s name per se, you’re probably already familiar with his artwork — particularly his impressive oeuvre of meme paintings.

In late October, the 47-year-old dad impressed TikTok with a brief video showcase of his acrylic paintings, which feature everything from Kermit drinking tea to Leonardo DiCaprio laughing. The first time he actually shared his collection of meme-based works, it didn’t take long for the clip to blow up thanks to the novelty factor of seeing one of your favorite jokes rendered in such a decidedly offline medium.

I painted a bunch of memes. Guess how many? #art #painting

“Memes connect with everyone, because everyone’s seen them. You can’t avoid them,” he said, explaining that he likes to paint “classic memes.” And though it’s interesting to think about how popular these paintings of older memes are given the ephemeral, ever-changing nature of the internet, Chapman believes that their appeal lies within an ability to inspire “a nostalgic good feeling” when you look at them.

A self-taught artist, Chapman — who is a roofer by day — has been painting for around 15 years and perfected his skills through plenty of patience and daily practice. He only recently started adding the meme paintings to his larger body of surreal, pop culture-influenced “comedy art,” which he described as “a one-panel comic strip that someone just tried too hard on.”

“I can paint okay, but I’m better at thinking of funny things to paint,” Chapman said, adding that the memes “are so easy” by comparison since he doesn’t have to concept anything.

“[My original pieces are things] that are painted well, but could’ve just been drawn,” he continued. “But it’s almost funnier that way, because someone wasted more time doing this thing.”

Because of this though, he still finds the immense popularity of the meme paintings somewhat bizarre. And it’s a feeling made even stranger given that several of his original works — including his pendulum paintings, as well as pieces of a turtle doing coke lines through a straw and a razor blade snow shovel — have already gone viral, with some becoming their own memes.

“When I started, I was doing all this original work, but the memes are what people connect to,” Chapman said, before joking that he now considers his paintings a way of “saving these memes in analog form in case all the electronics get blown up” in some unforeseen “electromagnetic pulse event where all the computers go out.”

Still, Chapman does enjoy making these paintings since they’ve added a little levity to his daily painting routine. After all, he usually paints for four to five hours a night, which means that it’s “nice to stare at something that makes you smile,” especially “when you’re painting something for a long time.”

He said he’s planning on doing more meme paintings and posting another mini-tour showcasing works inspired by new memes mentioned in the comments. But for now, Chapman’s just focused on completing a few more pieces, including the Drake “Hotline Bling” and Sad Keanu memes, as well as continuing to provide viewers with some much-needed joy through the power of humor and art that tells a story.

“The pictures of memes always have a story. If you look at it, there’s a little story in there, even aside from the words people put on them,” he concluded. “I mean, I just know I’ve died laughing at memes; some of them are so funny. And I love them, because they can ridicule and that’s one of the most powerful tools. Humor makes you feel like everything is okay.”

You can check out all of Travis Chapman’s paintings on his Etsy store.