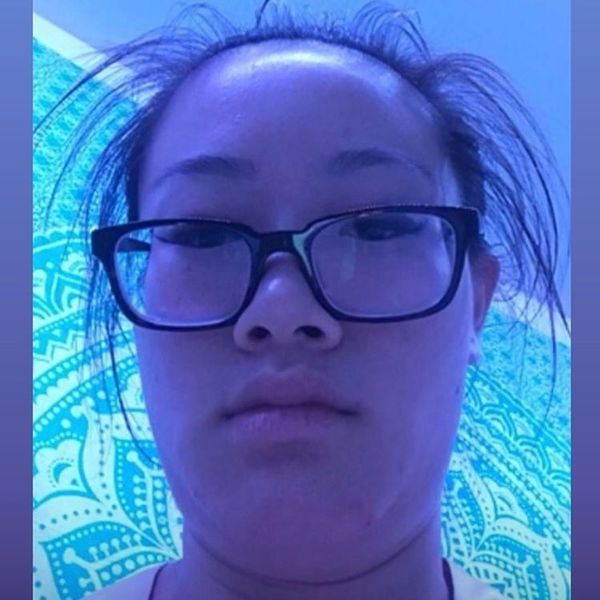 If you’re on TikTok, you’re likely familiar with Melissa Ong‘s face. Specifically, her blue-hued selfie that propelled her to internet infamy as it became a bonafide rallying cry for members of her Step Chickens “cult.” More importantly though, Ong’s mobilization of her prank-loving following has also led to an upending of the traditional notion of trolling — no small feat for someone who began their online career just a few months ago.

First though, a little background is in order. A former engineer for Yahoo and Google, Ong quit her job in January to focus on comedy, and has since become known for her dark sense of humor, “alpha-ness” and “quantity over quality” ethos.

And so, with more than two million followers on the platform, the 27-year-old has since solidified herself as one TikTok’s rising stars by creating her Step Chickens cult, whose name is a nod to her “Cornhub” videos in which she spoofed porn’s obsession with the step-siblings trope in a chicken costume.

That said, the cult itself was born after she joked about starting a religion in a video made as part of her “TikToks I Film at 3 A.M. When I’m Stoned” series. This led to her mobilizing “the collective power of my following to go spam someone else’s comments and just be a troll.”

In the wake of several successful pranks and a comment in which a fan suggested they all change their profile pictures to something Step Chickens-related, Ong — who’s known as “Mother Hen” to her followers — decided to have them use “this weird, ugly, blue photo of myself.”

“I wasn’t like, ‘This cult I formed high in my bathroom at 3 A.M. that’s loosely based off a furry pornographic stereotype is going to be the thing that makes me go viral,’ but I guess that is it now,” Ong laughed, explaining that the move sparked several other cults surrounding big TikTokers and a subsequent series of online “cult wars” where groups would compete to see who could get the most comments on a randomly chosen video.

To this end, it may be more helpful to think of TikTok cults as a type of fandom centered on a particular content creator. Akin to other similar groups like the Lego Star Wars army, the Step Chickens typically flood comment sections and challenge other cults, all in the name of Ong.

Amid quarantine though, Ong said her following has only continued to grow and eventually led to the recent launch the community-based Step Chickens app — repurposed from her old co-worker Sam Mueller’s fandom app — which climbed to number six in the iTunes App Store with more than 100,000 downloads in the span of a few days.

“I think the appeal of the Step Chickens is the same psychology of why you attach yourself to a certain sports team or why people are Xbox versus PS4. There’s this sort of in-group mentality,” she explained. “What I’ve heard from people who follow me is that it’s helped them feel like they’re a part of something and it’s like, ‘Thank you for giving us something to do in quarantine’ or, in a weird way, ‘Thank you for giving us a sense of purpose,’ even though it’s totally meaningless.”

Granted, there’s something to be said about the fact that Ong has spurred a powerful, millions-strong movement within a space where the notion of trolling — whether it’s of the hate comment or prank variety— is still attached to a very particular subset of internet users who tend to be white, middle-class and male. Needless to say, the idea that an Asian-American woman has become the face of a new prank-based movement like this could be considered a statement in and of itself.

“A lot of my followers view me as very ‘alpha,’ which isn’t a trait associated with women… so I thought it was really cool that people chose to be in my cult following and do all this shit with me even though I’m female,” she said, pointing out that most of the biggest TikTokers “are all white and look a certain way.”

Even better, according to Ong, most of her followers are women, people of color, members of the LGBTQIA+ community, or an intersection of these identities, which she said could be attributed to the fact that her brand of dark humor “resonates” with minorities who “experience so much shitty stuff if you grow up in America.”

“I think [millennials and Gen Z] are becoming more and more aware of these issues, so in a way, my dark humor is funny to them, because they have the skin to handle it since they’ve dealt with shit,” Ong explained, though she went on to admit that she’s spent a lot of time thinking about how her success pushes against the sexist notion that “women aren’t funny” — something she said has led to “a bajillion hate comments” about how “cringe” she is every day.

She continued, “It’s weird because a lot of people don’t think women can be good-looking and funny. Obviously, as quote-unquote woke as you can be, misogyny and sexism is still deeply rooted in people’s psychology, because of the society we grow up in. So I think it says something that I — as a female, and especially as a minority female — can mobilize people to do this kind of shit.”

The latter is something she chalked up to a general lack of Asian representation within the media, which paints Asians as quiet and studious. And though she said things are slowly changing for the better in comedy thanks to the casting of people like Ali Wong and Kumail Nanjiani, Ong also confessed that a lot of this humor is still a little too identity-centric and self-tokenizing for her tastes.

Related | This Generation of Comedy Is Queer

“I intentionally stay away from Asian-related comedy… because so much of Asian comedy is people talking about being Asian, and I’m like, ‘Well, that’s not my whole life experience,'” she said. “It’s all in our collective past, every Asian I know was like, ‘Yeah, we made the dog eating, squinty eye jokes in middle school, because we wanted to fit in,’ and we grow up later and were like, ‘What did I do that for?'”

While “there’s nothing wrong with relatable content,” as Ong explained, “I definitely feel cool that I’ve built somewhat of a little empire, and I didn’t have to use the cheap-shot race joke, or be a man, or white.”

This reliance on racist Asian stereotypes tends to extend to memes. As Ong pointed out, while she loves things like Brittany Broski‘s reaction or the Real Housewives of Beverly Hills’s Taylor Armstrong yelling at a cat, a lot of faces used in popular memes are white or Black (though the latter also presents its own problematics). That said, when there is an Asian face in a meme, it tends to be something racist and riddled with stereotypes, such as High Expectations Asian Father.

“There are so many white faces that it’s cool there’s an Asian meme that people now know about, and it’s this really good picture of me,” she laughed, saying she ultimately thinks that it’s “really cool and powerful” to see how “this army of women totally fucked up TikTok for a minute” with her face — especially given the fact that “people hated it” and the entire incident “sparked controversy.”

In this sense, Ong is happy to say she’s helping with this evolution of trolling and, in the wake of her success with the TikTok cult wars, is now planning to take over YouTube with the help of her Step Chickens.

“My goal has always been internet domination,” she said. “Obviously, it’s hard to get people to switch apps, but I’m just going to try and grow it on YouTube in the same way as TikTok, but I have no doubt that we’ll dominate.”