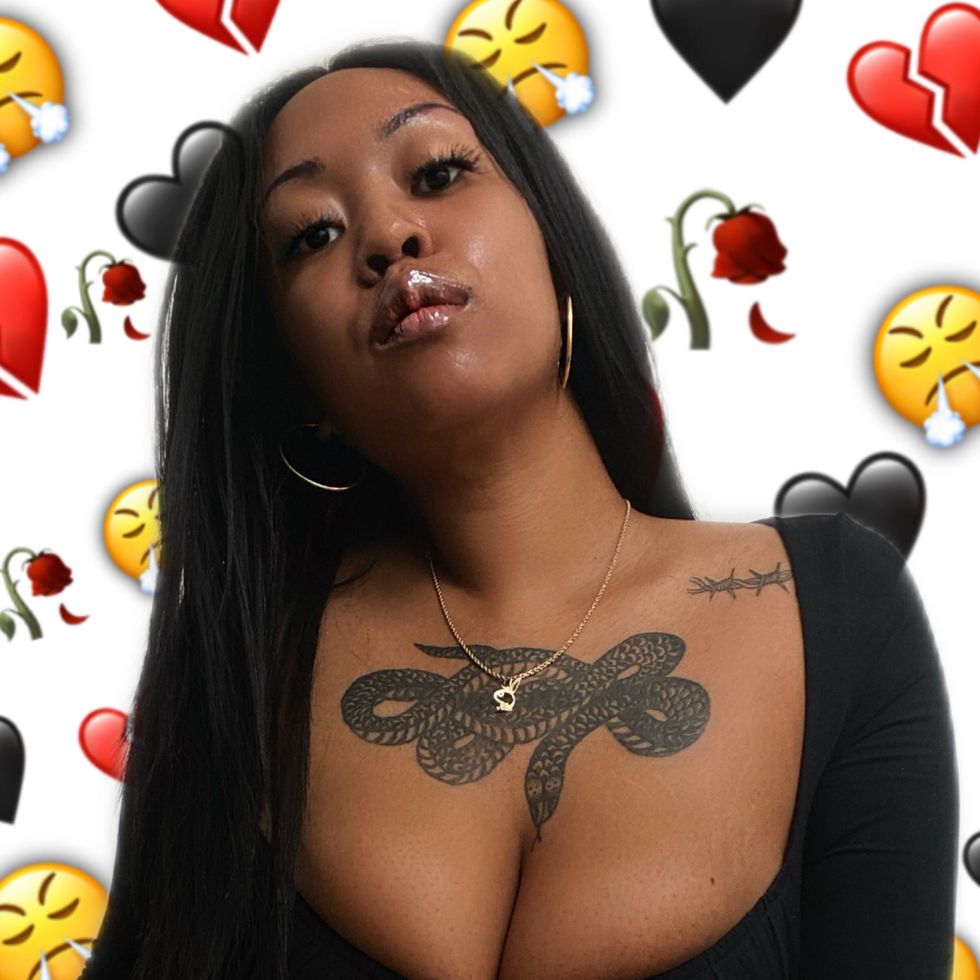 Patia Borja doesn’t take things too seriously. Not even during a pandemic. “I’m still blowing my paychecks on UberEats,” she tells PAPER. “I live a pretty simple life.” This nonchalance makes her the perfect guide to surviving lockdown, and she’s become something of an internet dignitary during these past few troubling months.

With help from friends MISTERVACATION and River Moon, the 27-year-old runs @patiasfantasyworld — the meme page you’ve almost definitely heard of if you’re very online and live in New York City, or probably would have soon stumbled across if you’re very online and live anywhere else. It’s one part absurd, one part obscene — and rooted in Black cultural references and Black experiences.

Borja, like pretty much everyone else her age, spent a lot of time on the internet growing up. But her online life didn’t heat up until 2017, when she gave into peer pressure and decided to make a finsta. “I think I was just bored. And I was definitely unemployed,” she says.

She was hesitant to make a traditional finsta — which typically involves long diaristic posts or almost-nudes or both. “I always thought it was stupid to have a finsta if you weren’t poppin,” Borja says. “Like what the fuck do you need a finsta for?”

The result was a few selfies posted on a private account, alongside a curated collection of memes and other funny images that Borja had found online. After a while, saving them became a habit. And then her friends got involved, sending her things they wouldn’t normally post on their own pages. 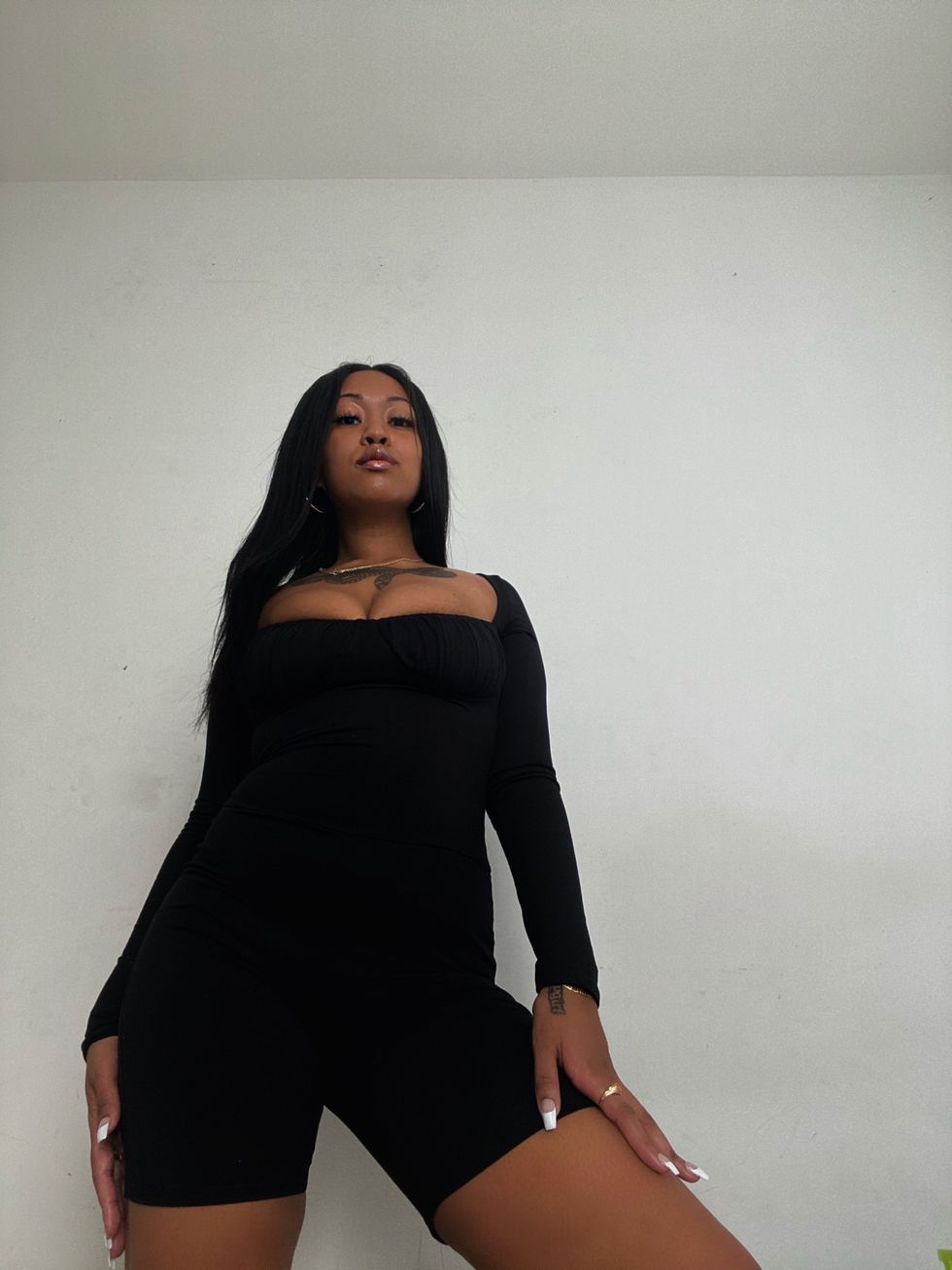 She refined her tastes, favoring things like the oddly cutting Facebook status updates that have become her bread and butter — calling people out for having hot breath or explaining how to know if your man has been faithful. “I feel like I’m a 13-year-old boy sometimes,” she explains. “I have a kind of fucked up sense of humor.” But she knew her friends had the same sensibilities. After about a year, they started nudging her to go public. She was hesitant, but eventually gave in.

She made her way to 1,000 followers by January 2019, which at the time felt like a lot. “For me was like ‘Oh Fuck!’ I’ve never had that many followers on a social media platform. I considered deleting,” Borja says. “You know, in New York people talk. I didn’t want to be that girl with the weird account.” Even then, she started to worry if the burden of running a meme account was even worth the trouble. She decided to stick with it, posting regularly and recruiting backup to contribute to the page as engagement grew. A year later, her follower count had climbed to 30,000. In May 2020, she hit the 100K mark.

Borja says the reason people like her page is simple: “I’m real. I’m honest.” Which is true. “I think I bridge the gap between the corniness of having a meme account and, like, the hood shit.” She still thinks of the account like a finsta, and it feels like an inside joke as a result. There are no rules in Patia’s Fantasy World: An image of someone grating a bar of soap over a bowl of pasta fits right next to a map demonstrating how the initials of the countries in North America spell “cum.” And a few posts above that is a post calling out someone who said something racist in the comments section.

Humor aside, there’s a deeper nostalgic appeal to Borja’s posts. Part of what makes this recent wave of similar meme pages on Instagram so compelling is that they harken back to a different, slightly less connected internet. One that was more low stakes. When our digital lives weren’t so tied to our “real” lives, and small online communities felt more insulated. On forums and microblogging sites like LiveJournal and later Tumblr, the intended audience of a blog wasn’t usually the masses, but rather insiders in the know: groups of marginalized people sharing stories, academics and organizers sharing resources, even just fans of a particular niche TV show making fan content. It makes perfect sense then that Borja was a Tumblr kid. Her blog was “mostly memes and fucked up images,” as you might expect.

Related | It’s Time to Have the Colorism Conversation

When she originally joined Instagram, Borja had no intention of replicating her Tumblr blog — like everyone else at the time, she saw the platform as something different. By design, Instagram stands at odds with the microblogging sites that came before it. Follower counts are public, making measuring the “success” of an account easy to assess, and then monetize. There are strict community guidelines prohibiting nudity.

“At first, it was pure,” Borja says. “We all thought the fucking filters were cool. We all were so excited to share the apple pie we got on the Lower East Side. And then Instagram made that really annoying transition into influencer culture.”

So she returned to her Tumblr roots. With its focus on community, Patia’s Fantasy World has become a subversion of Instagram’s ethos: a place to connect for a largely Black and queer audience that’s in on the joke.

In recent months, Borja and her friends have become even more adamant about keeping the page that way. As a Black woman (fans are often surprised to discover her gender) who’s seen Black culture in many forms co-opted across the internet, Borja is keenly aware of the power of community online and how difficult it is for Black people to find it. But with several high-profile police killings of Black people making headlines over the past few weeks, she has faced backlash from followers for breaking form and posting information and resources to support organizing efforts. The responses have been a stark reminder that despite her intentions, the page’s following is largely out of her control.

“All of these people who are not Black love to laugh at Black jokes that come from Black pain or trauma,” she says. “But post something serious about Black life, and they get upset.” Her approach is often to face them head on, by correcting them in the comments sections and on the page.

“I have lots of non-Black POC commenting and messaging me saying they felt like they really resonated with the humour on my account,” she says. “And I have to ask, since 90 percent of the content I post says ‘nigga’ in it, what resonated? And they can’t answer. Go follow Fuckjerry or something. There are so many white meme accounts that have content for you.”

When I ask if there is a target audience for Patia’s Fantasy World other than her friends, she immediately responds with a single name: Azealia Banks. “The only fucking person I make my account for,” she says. “The person who understands her is the person I want laughing at my content. I want to do a partnership with Bussy Boy.”

Related | When White Kids Grow Up on the Black Internet

Anyone even remotely familiar with Banks, the Harlem-born rapper and online shit-starter might see the connection between her and Borja — both aware they’re not everyone’s cup of tea (in Banks’ case, sometimes to a fault), both going ahead and doing what they want anyway and most importantly, both really fucking funny.

And that’s the secret to her success. Instead of obsessing over followers, or posting things that she knows people will like, Borja just does what she wants. Even as the page grows, she prefers to keep it low-key, and let it lead her to whatever opportunities come along, even if that means letting it go someday. “I think other people would take it much harder than I would,” she says of that eventuality. “My goal is not to be 40 years old, making fucking memes. I’m not that wack.”

Ideally, Borja wants to use her experience to find others to make spaces for Black people to find joy and talk shit on the Internet.

“I just want to make people smile,” she says.