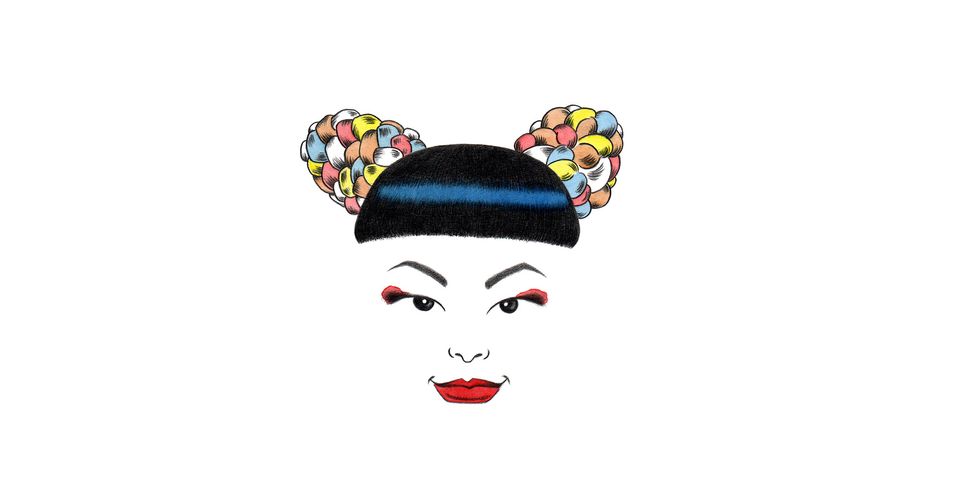 It’s a bright, sunny morning in Tokyo when Naomi Watanabe logs on for our video interview, but she doesn’t call in from the hectic set of a television show or a glossy editorial photoshoot like she typically might. Much like the rest of the world, the superstar comedian, actress and model is currently curled up on her couch in her living room. Fresh-faced and wearing a cozy black sweatshirt, at-home Watanabe appears far removed from her stylish, offbeat public persona: the boisterous, colorful jokester who has tickled Japan’s funny bone for the past decade.

But as the conversation progresses, she occasionally shares a ridiculous real-life anecdote (one, about a wacky father-son duo she encountered once at an airport, whose beer can-stuffed luggage cartoonishly exploded during TSA screening, sounds primed for an SNL sketch). As she relays these hysterical personal stories, her eyes twinkle mischievously and her voice bursts into an uncontrollable, gasping laugh that’s as infectious as it is effervescent. Ah, there she is.

Watanabe had a fairly tough upbringing, an experience that perhaps first sparked the 32-year-old performer’s desire for comedic escape. Born to a Taiwanese mother and Japanese father, her dad left when she was in elementary school. She was raised by a single mom in Ibaraki, located about an hour northeast of bustling Tokyo, where she grew up relatively poor. As a teenager, she started working at a family-style restaurant in lieu of going to high school. But, as she wistfully dreamt of a life in show business while waiting tables, she never lost her sense of humor: She taught herself how to dance like the pop stars she saw on TV, found consolation in the sketch comedians she watched on Japanese variety shows and delighted in making her friends laugh with her wild antics and skillful impersonations (called monomane) of the everyday people around her. 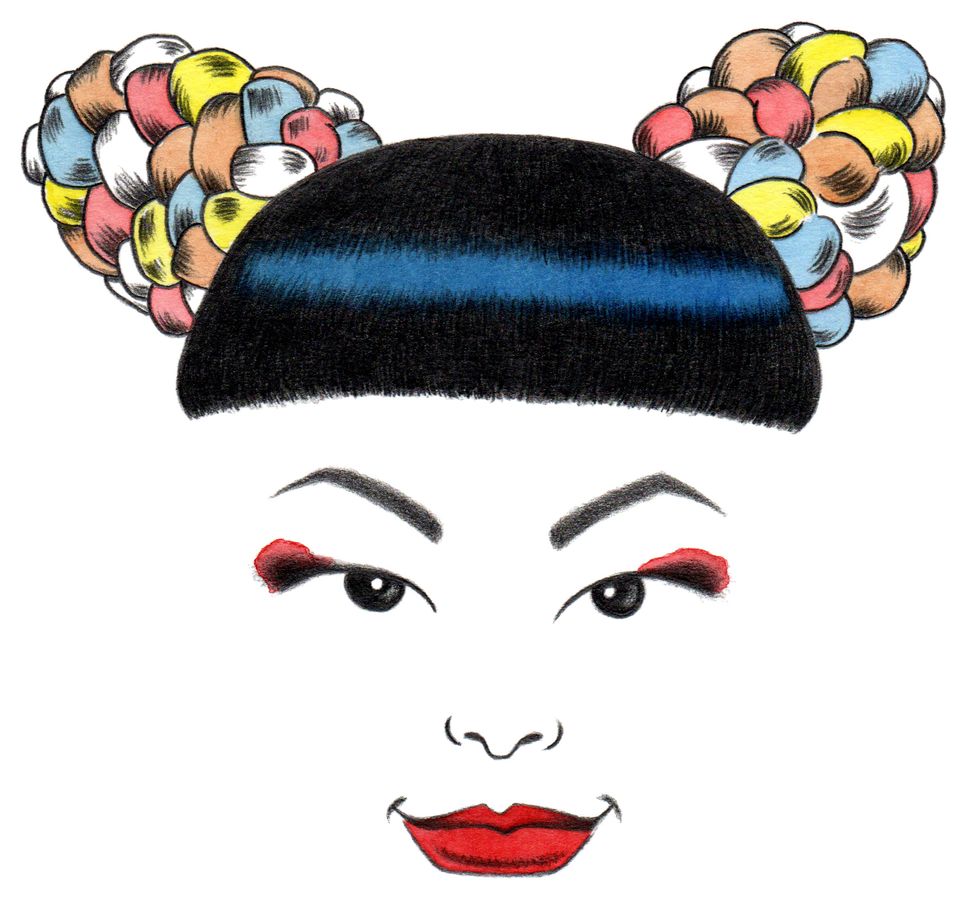 After a few years, Watanabe decided it was time to get serious about comedy. So, she saved up some money, quit her job, and ran off to Tokyo, where she enrolled at Yoshimoto NSC, a school for comedy. In 2008, when she was just 20 years old, she made her debut on the now-defunct iconic primetime variety show Waratte Iitomo!, where she first gained national attention with her signature celebrity lip-sync impersonations of stars like Lady Gaga and Mariah Carey — but it was a rollicking lip-sync performance of Beyoncé’s “Dreamgirls” and “Crazy in Love” that solidified her stardom. (A diehard Queen Bey fan since she was a teen, the performance eventually led Watanabe to meet her idol during Beyoncé and Solange’s guest appearance on the same show in 2009.)

“I’ve been doing impersonations ever since I was little,” Watanabe shares. “It just happened naturally. I would just start impersonating the random adults around me. I found it really interesting when people would talk in a unique way. I’d make comedy sketches based on those real-life characters. Obviously, I do Beyoncé and Gaga and others, but I really enjoy impersonating normal everyday people. I get inspiration from the most random encounters.”

With these uncanny celebrity impersonations, elastic facial expressions, and energetic dance routines, Watanabe’s garnered the type of fame and fandom akin to that of a mega-famous pop star. But despite this popularity in Japan’s owarai tarento (“talent of laughter”) scene, her stratospheric ascent was not without its obstacles. As a plus-sized, mixed-race (hafu in Japanese) Millennial woman in a male-dominated industry, Watanabe spent the last ten or so years carving out space for herself in an otherwise restrictive environment. This includes her playful, plus-size-inclusive streetwear line Punyus (the term roughly translates to “chubby” in Japanese). Launched in 2014, she “wanted to create something that doesn’t categorize plus-sized people into just one category or style” — a radical enterprise in “one size fits all” Japan, where thinness is both the standard and the ideal, especially for women.

With a flagship shop located in Tokyo’s trendy Shibuya109 shopping mall, Watanabe, who gets “a lot of comments from people abroad on Instagram,” hopes to eventually expand her self-described “genre-defying” brand overseas, particularly in the West. For now, though, she’s content to send a positive message to others who may feel like they’re not good enough.

“It’s important to embrace yourself as you are. No one’s perfect, but there are people that don’t realize that still,” Watanabe says. “It’s like, I already love myself, so what’s the issue? There are people who ask me, ‘Why are you wearing a tank top when you’re plus-size? Why are you smiling? Why are you so happy when you’re so big?’ Sometimes I think, ‘Is it so bad that I’m plus-size?’ I want them to know that it’s not like I’m doing these things — like wearing a tank top —because I don’t notice I’m plus-size. I’m doing it because I’ve already embraced it, so why point that out? It’s time for them to get over my ‘flaws’ and grow up and face the fact that them saying these things is their flaw. At the same time, if they do realize that [saying these things] isn’t okay, it means they could possibly be rescued. I’d love to help them get over it.”

Watanabe’s ebullient comedy, enhanced by her self-confidence and eye-catching fashion sense, is starting to attract global fame outside of her native Japan. She’s eager to reach a new audience: “I completely agree that good comedy [is borderless]. My ultimate dream is to become Mr. Bean. But my personal goal as a comedian — and the image I have of an ideal comedian — is someone who enjoys entertaining other people and doing things that other people will have fun with, rather than someone who thinks they’re funny in a narcissistic way.”

Mainstream international recognition may not be far off, as her stint as Kate Spade’s newest global brand ambassador and star of the brand’s joyful spring 2020 campaign indicates. (“It was almost not even a dream, because it wasn’t something I could imagine that would happen — to be the face of a U.S. brand,” she gushes.) In 2019, she appeared in SK-II’s international skincare commercials alongside Western stars James Corden, John Legend, and Chloe Grace Moretz. The same year, she featured as a guest on an episode of Queer Eye: We’re in Japan!, a special season of Netflix’s hit Queer Eye reboot, which saw the Fab 5 take on Tokyo. “It was very educational and happy. All the guys were filled with a lot of love,” she says of her experience on the show.

Related | How Mary Beth Barone Adapts Her Stand-Up Under Quarantine

The appearance marked a turning point for Watanabe’s international visibility. She recalls that when she returned to New York after the season aired (she currently splits her time between NYC and Tokyo), she began to get recognized on the street more often. “Before, there were a lot of Asians who would recognize and stop me, which was great. But after Queer Eye, lots of non-Asians started talking to me as well. The highlight was when I was on the subway this one time. This girl kept smiling at me, so I was like, ‘Konnichiwa!’ Before she got off, she asked me if I was Naomi Watanabe. The screen of her phone was visible and I took a glance and she had Googled ‘Japanese comedy Queer Eye.’ So, she recognized my face but not my name — but it was still very, very exciting and I was so happy that she even recognized me at all! That moment motivated me to work harder so more people will recognize me and know my name.”

As the most-followed Japanese celebrity on Instagram, a title she holds (as of May 2020) with 9.3 million followers, Watanabe knows the importance of staying connected. Ever since the coronavirus pandemic sent Japan into lockdown, the multi-hyphenate entertainer has been working diligently from home, appearing on Japanese TV programs remotely via video calls. She’s also turned to social media and livestreaming to entertain her followers, even if that means finding humor in the mundane… like making a smoothie for the first time.

“Honestly, I’d never made a smoothie in my whole life,” Watanabe admits, laughing as she explains her decision to livestream the near-hourlong process on Instagram a few weeks ago. “Based on the comments viewers gave me, I had to use my blender, which I hadn’t touched in years! So yeah, I’ve been able to reach more people and have more fun. I definitely feel more connected.”

Even so, navigating the internet comes with its own set of unique challenges. Most recently, Watanabe has found herself preoccupied with two of the most relatable and pressing pitfalls of social media: misinformation and participation fatigue.

“Not everything you see on social media is true, so you really have to think about which information is correct and start filtering that information on your own,” she warns. “There are a lot of people who get into trouble because of what they say online. The rules are more vague and there are more viewers. Things are changing right now. There’s an overwhelming amount of people [online]. There are constant Instagram livestreams, so many different collaborations… I think everyone’s getting a little tired. We need to start thinking, myself included, about doing things a little differently.”

Watanabe adds that one silver lining of the pandemic is that the global public appears to finally see the true value of the essential workers who staff our hospitals, restaurants, grocery stores, and more the world over. “We’ve really defined what each person does for somebody else,” she muses. It’s something she’s found inspiring on both a personal and professional level. It’s also made her think more about her own role in the entertainment industry, and how to best serve the public in times of heightened anxiety: “There’s a special power in laughter and comedy. I think comedians worldwide right now must feel especially good about making people laugh.”

Related | You Need to Be Watching @PetShopBoy’s Insane Instagram Stories

Most recently, Watanabe has enjoyed connecting with her followers via NAOMI CLUB, her new YouTube channel where she frequently livestreams. The cozy streams offer viewers access to a more intimate version of Watanabe: She often records herself eating home-cooked dinners, video chats with friends (some famous) on a second laptop, performs everyday makeup tutorials and cooks up delicious concoctions right in front of her webcam — all while chatting with fans who post comments in real-time.

“When I do my YouTube livestreams, it makes me happy to think that I’m making viewers happy for those two hours. I’m grateful that even in this difficult situation, I’m able to do this. Sometimes though, I’ll watch certain funny videos and some people do comedy that’s a little sketchy, like making coronavirus-related jokes. I think there’s a very fine line [between] what’s funny and what’s hurtful. I just want to continue doing comedy that makes people feel good.”

And even though not everyone always quite gets the joke, there’s always good future material to be found in the comments section.

There’s “a battle with people who don’t fully understand my comedy yet, but we’re getting there,” Watanabe says. “There are also people who think that the livestream comment space on YouTube is their Twitter account. One person keeps writing, ‘I woke up early today, I’m going to pick up my kids now.’ They’re completely serious and I just find it hilarious. That’s definitely where I get my best inspiration to impersonate somebody.”