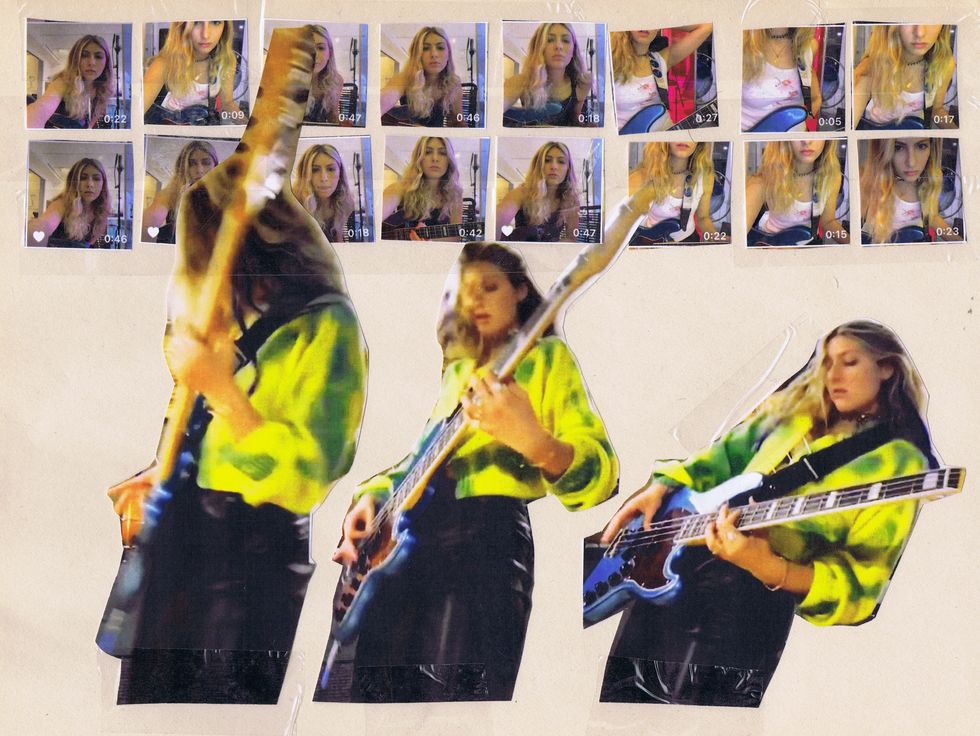 It was only a matter of time until the world took notice of Blu DeTiger. The Gen Z singer-songwriter has been putting out tunes and testing the waters with her solo work over the past year and a half, making a name for herself at some of downtown Manhattan’s hottest spots as a bass guitar-playing DJ. She’s immediately recognizable. From the disco-centric Alphabet City dive Joyface to the luxe Public Hotel, her spot behind the ones and twos is reserved just for her and the neck of her instrument.

After taking a small winter break from releasing a lineup of funk-inspired singles — having taken time to play alongside alt-pop kickstarters Caroline Polacheck and Kitten’s Chloe Chaidez — Blu’s back. Not only is she bringing one hell of an earworm to the table with her new single “Figure It Out,” a blasé take on indie-pop lovesickness, she’s also bringing a newfound social following: enter, the almighty TikTok.

Related | Blu DeTiger’s ‘Tangerine’ Is Funk for the 22nd Century

While casually scrolling through my For You Page, I came across a familiar face playing a clever rendition of Megan Thee Stallion’s “Savage.” The Suga single had been blowing up on the platform already, and while most wouldn’t associate the song’s sex-slicked lyrics with the low-passed acoustics of a bass, Blu brought the instrument to the forefront of the trend regardless. The video has since racked up millions of views and helped build a consistent fanbase for her on the app, with over a quarter of a million people following her takes on TikTok trends and tracks.

lol I had to ##savagechallenge @theestallion

While a bass guitar might be considered inaccessible compared to the front-and-center sonics of a keyboard or topline strings, Blu makes it all friendly on TikTok. No note from her covers or original songs is simply bubbling underneath a melody or taking on the ice-cold attitude that bassists are normally expected to evoke. Instead, she’s bobbing along to even the lowest of plucks, right there with her listeners and viewers; she’s enjoying it just as much as you.

PAPER caught up with Blu DeTiger to talk about the surprise of TikTok virality, DJing gigs and how she created her new single “Figure It Out,” below. 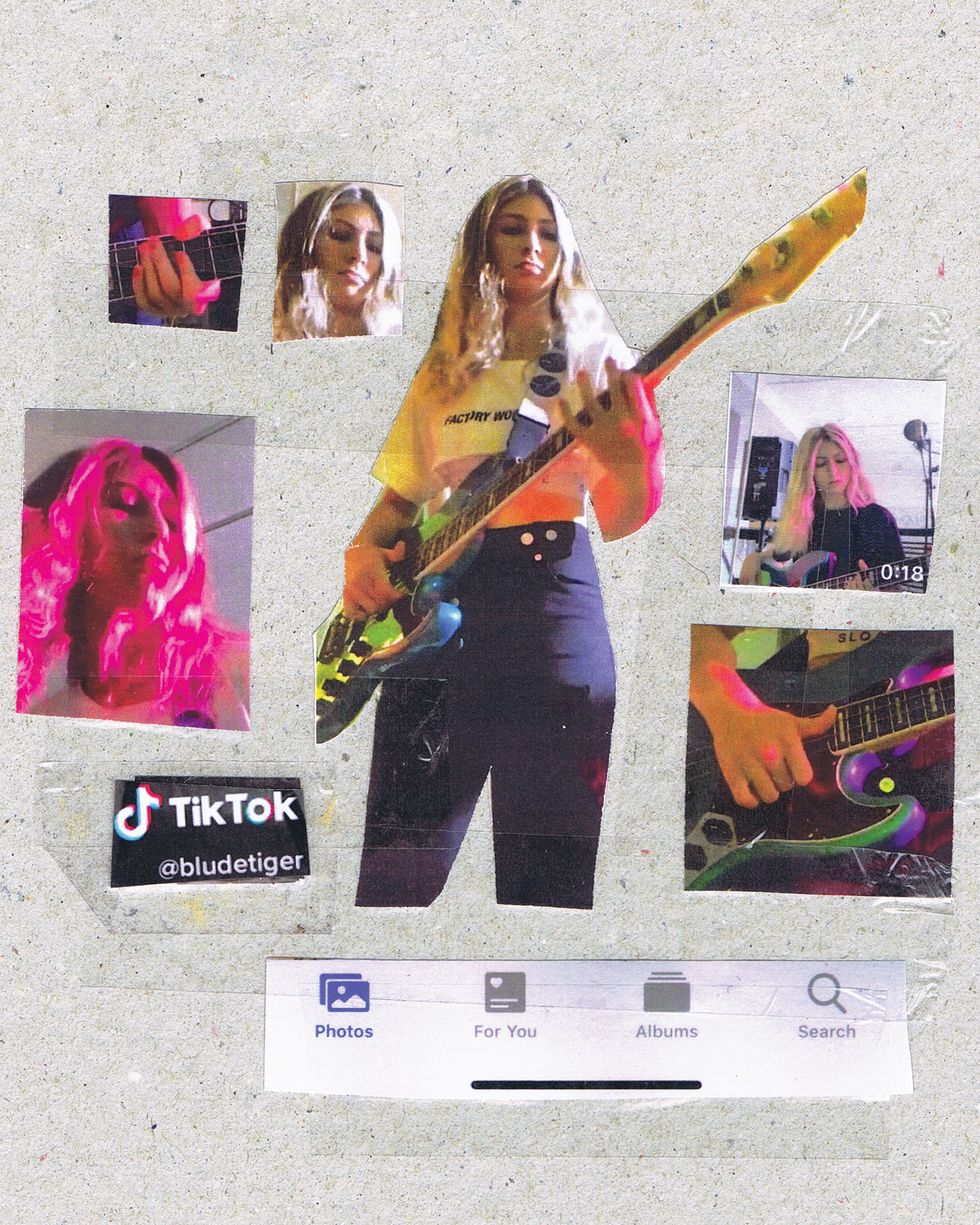 What all have you been up to since your last single dropped?

I’ve been writing music and doing a lot of touring. Most recently I’ve been touring with Caroline Polachek as her sole bandmate. It’s been amazing. I’ve learned a lot from just hanging out with her, and every show has been special. I was also about to go on a European tour with an artist named Fletcher that I was super excited about. I was opening for her as well as playing bass in her band. The Fletcher tour has been postponed as well as many of the Caroline dates (due to COVID-19).

Do you have any crazy DJing stories from the past year?

I don’t know if this counts as “crazy,” but for New Years 2020 I had a really long and packed night. I think that’s probably the most sets I’ve had to do in one night. I first had a DJ set at PublicArts from 9 PM – 12 AM to ring in the new year. Then I went to Brooklyn to meet up with some friends. I took an Uber to Ridgewood where my second set was. Did my hour set there from 3:30 – 4:30 AM, then DJ’d some songs for my friend Alice’s live set from 4:45 – 5:15 AM. Then, I ended back in Manhattan at Joyface to play some songs on bass. At 6 AM they brought out bagels for breakfast — it was amazing. The idea of hundreds of people dancing in a crowded club, or bouncing around the city at night with friends, feels so distant at this moment. I hope we can all get back to being together, physically, and dance soon. 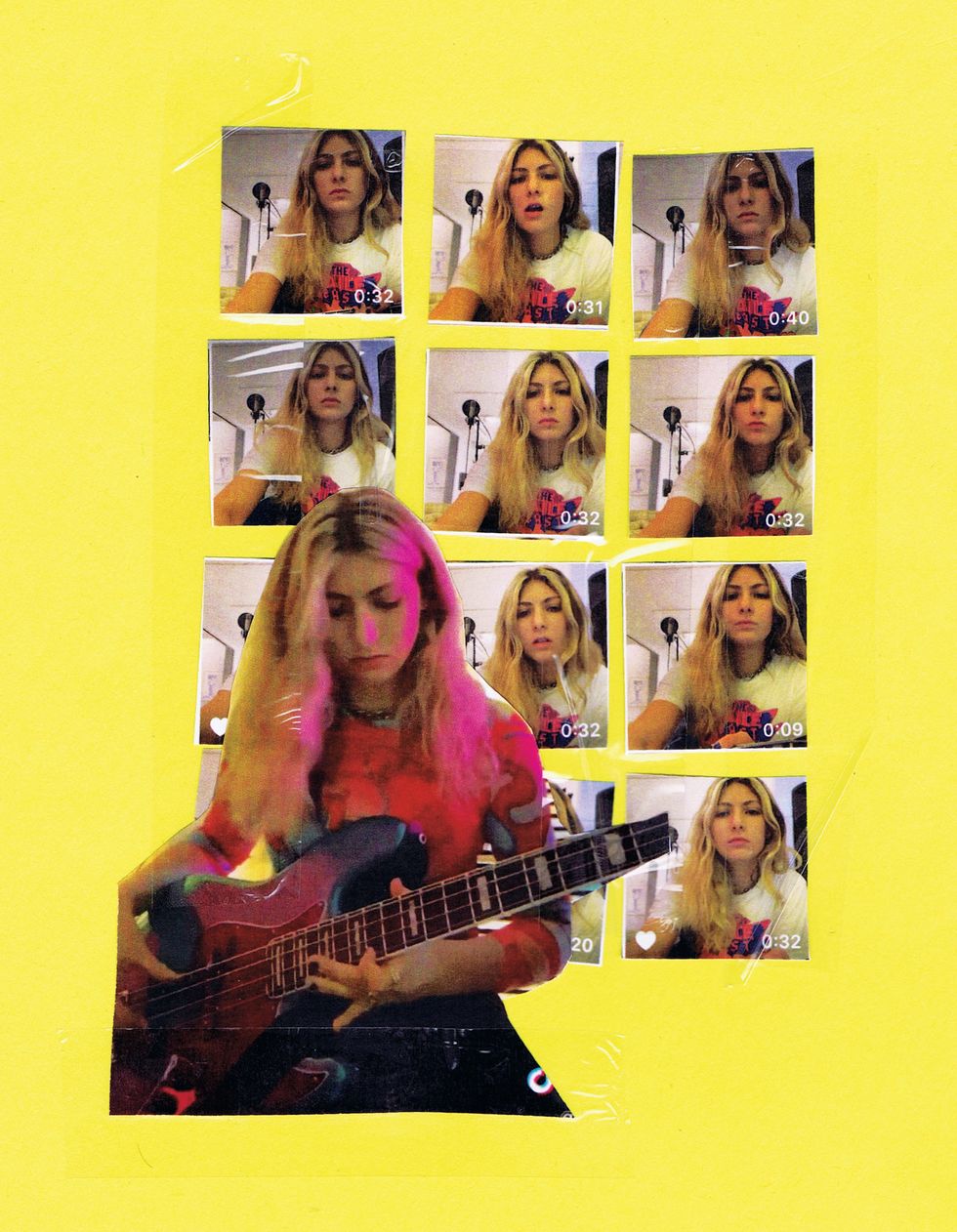 When did you start making TikToks?

I technically posted my first one when I downloaded the app back in November 2019, but I didn’t really use the app until I posted a cover of Doja Cat’s “Say So.” I was about to leave for the airport to start a tour, and was going to be away for a while, so I thought I should make some videos on this platform before I left and see what happened. I wasn’t thinking much about it, but I woke up the next day after posting the Doja Cat video and it had over 30k likes and hundreds of comments. I posted that video on March 2nd of this year and I got hooked and have been posting every day since then.

Have you been surprised by the massive audience you’ve reached with these shorter clips and covers?

Yes and no. I’m always extremely grateful for any audience that I have. Now that I’m taking a second to reflect, I realize I have a unique set of skills for these videos. I’ve been playing bass since I was 7, and I can also slap, which not all bass players can do. It’s primarily a funk technique that isn’t necessary to all genres of music. There are incredible professional bass players who don’t do it. But slap is exciting, it’s what a lot people think of when they think of bass, like Seinfeld, “slap-a-da-bass.” People love to see it and it cuts through from an audio standpoint, within the track and on the iPhone, which is important. Sometimes it’s difficult to hear bass on these iPhone speakers. When I started DJing, I always brought my bass and played along to my set, and I still do. I have a jazz background as well, so I could re-harmonize songs on the fly. I could slap over Cardi B, shred over Gwen Stefani or just sit in the pocket of a song. I can play the exact part in the recording, I can improvise, or I can even make up a bass part completely from scratch. Most of these hip hop songs don’t have live bass. Most of my bass “covers” on TikTok are my own made up bass lines that I thought could work musically or be fun for the song. I think this is a skill I developed through DJing with live bass and through writing my own songs too. And not for nothing, I’m covering certified hits for the most part — songs that are familiar, popping on TikTok already, and/or are hot AF. People just love covers. 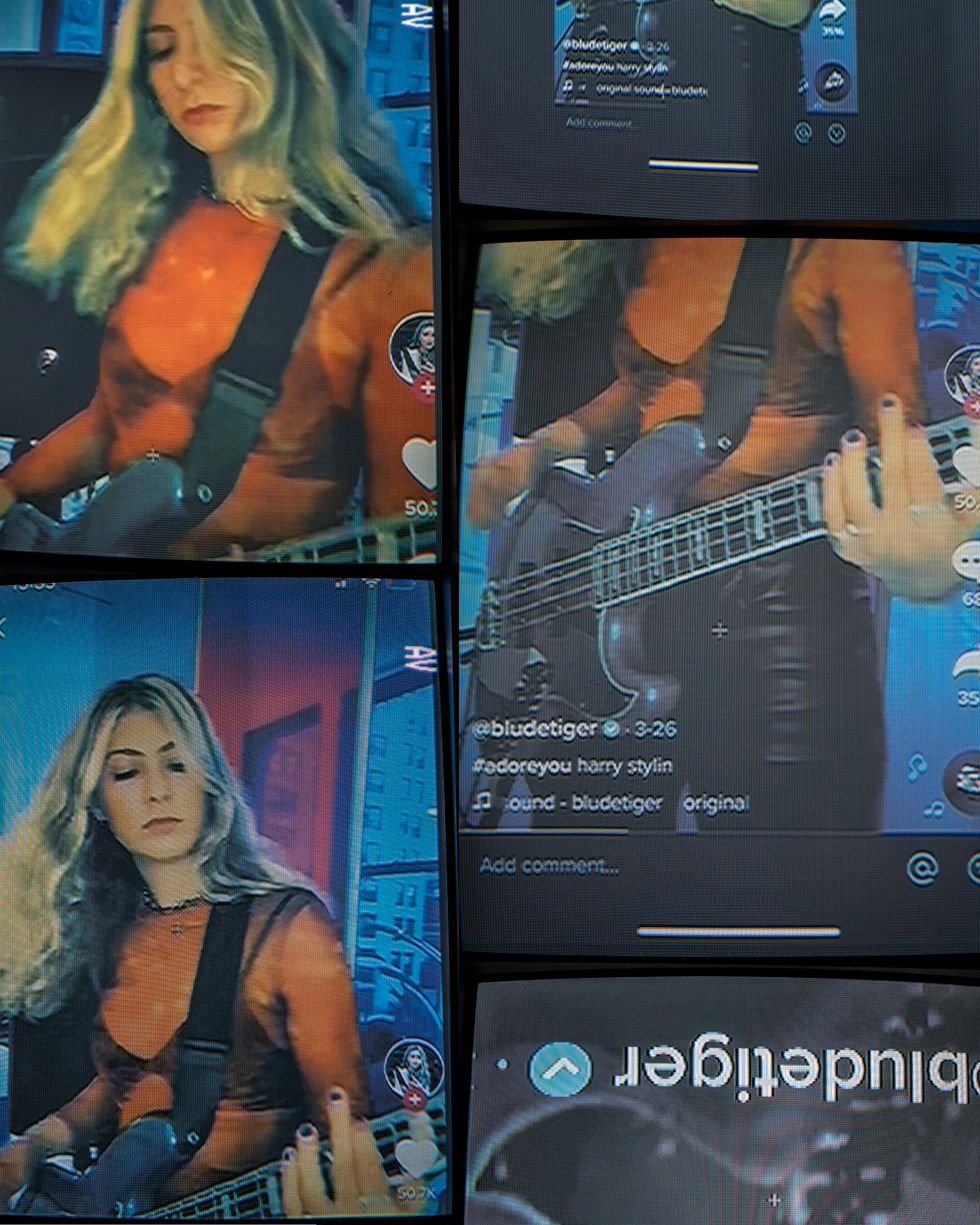 Are there any songs you haven’t covered yet that you think will translate well as a cover?

I have a list of songs that I want to do, and I try to make at least one a day. Today I’m going to do “Toosie Slide” by Drake. I like to do the unexpected ones — songs that don’t have a real live bassline. No one expects live bass with trap beats usually and it actually turns out pretty cool.

Have you had the chance to network with any other big TikTokers?

I haven’t in person obviously since everyone is at home right now, but I’ve made some “collab” videos with a few people. Those are videos of me reacting to a video of someone playing and I add the bass part. I’ve done this with a drummer, a guitarist, and a talk box player. I feel like all the big music accounts find each other eventually. 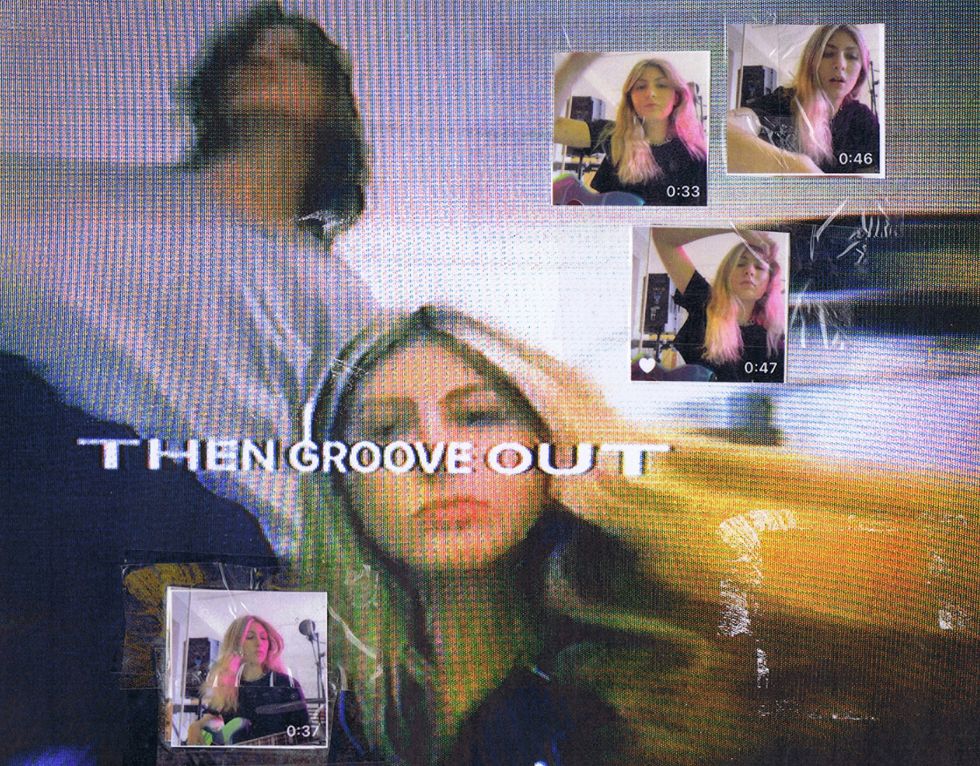 Are you planning to have “Figure It Out” go up as a TikTok sound that people can make videos to?

Yes, definitely! I really hope people feel inspired to make videos of them playing along to the song or dancing to it.

How did you get the idea for the new song?

I wrote it exactly a year ago. The beat was sent to me, this trotty 6/8 groove, and I was in a session with my friend Bayli. The song just poured out. It started with the “Don’t know what you’re saying/ You’re flying higher than a plane” lines and it honestly just wrote itself from there. I think we had the first verse and chorus written in about 20 minutes. It was one of those songs that I honestly didn’t even know what I was writing about until it was finished. It just came out from what I was feeling that day and then I realized what I was trying to say after the song was pretty much done. Then after taking a break from the song for a while, we finished it up with the drop “oohs” part and then the emotion of the music and the lyrics all really clicked.

Do you have any plans to release a full-length project in the near future?

Yes! I will definitely be releasing an EP this year. Some of the songs I want to include were just written and produced this week in quarantine.

Stream Blu DeTiger’s “Figure It Out,” below.